We had planned to rendezvous with Diane in NYC at the beginning of our trip. She had already bought a ticket to NYC from her home in Georgia. Happily, my sweet husband was fine with the idea of me running off in high spirits and leaving him at home, so off I went.

. . . a comedy, a tragedy, and three musicals — all terrific productions.

Here we are enjoying an after-theater dinner at Osteria al Doge, one of our favorite restaurants in the theater district: 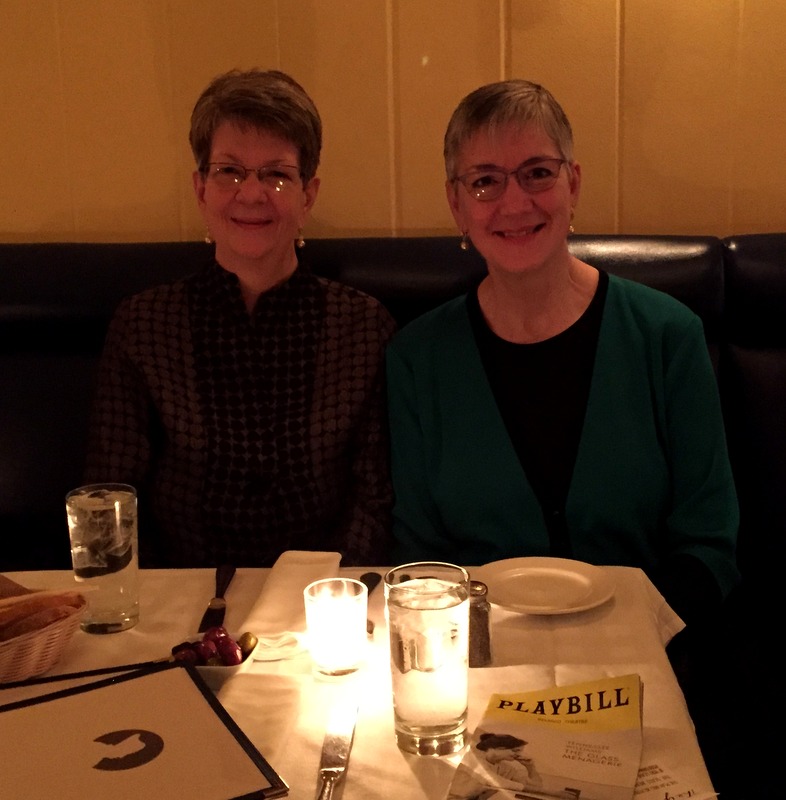 We dined on prosciutto-wrapped shrimp served on a bed of soft polenta garnished with watercress: 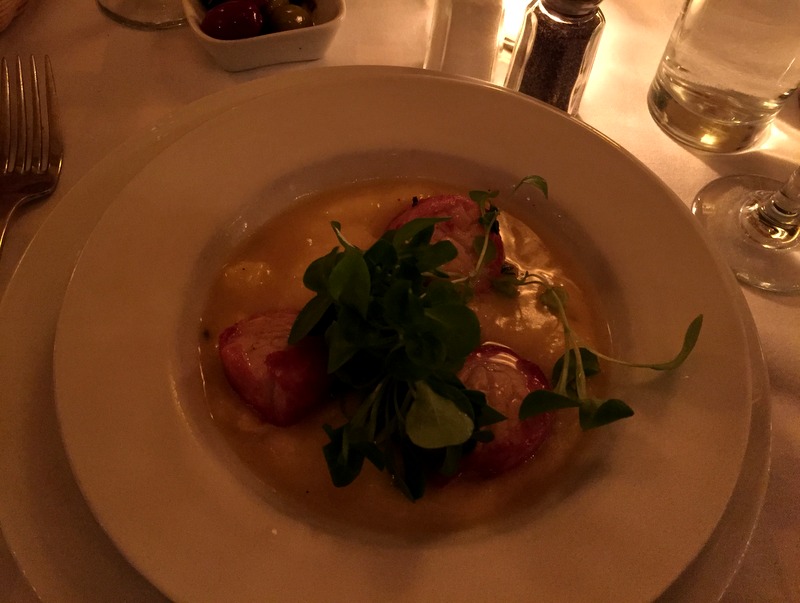 Yes, it was delizioso!

We saw some excellent exhibits, including two at the Museum at FIT (Fashion Institute of Technology) and one on Venice at the New York Public Library (NYPL): 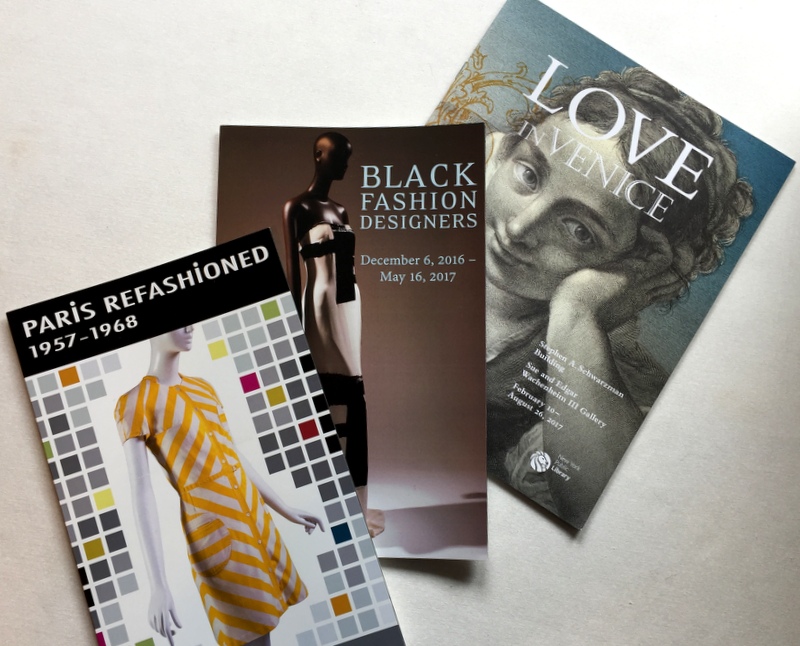 I also went to New York on a quilt-related mission: to visit the shop of Victoria Findlay Wolfe. Another bit of heaven! We were greeted warmly at the shop by Lindsey, who gave me permission to take photos: 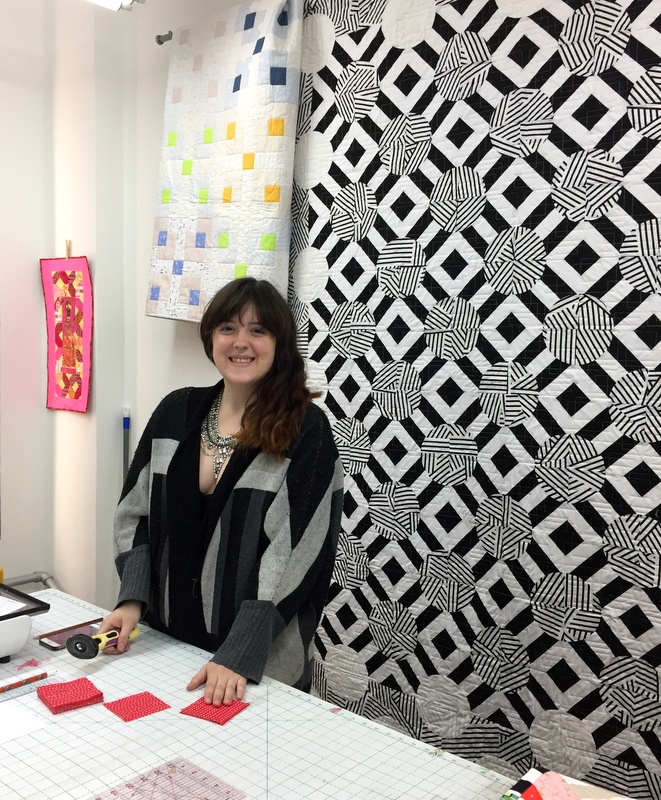 Barbara B., a student in one of my “Sew with Dawn” classes at the Pine Needle, bought Victoria’s new pattern Star Storm recently: 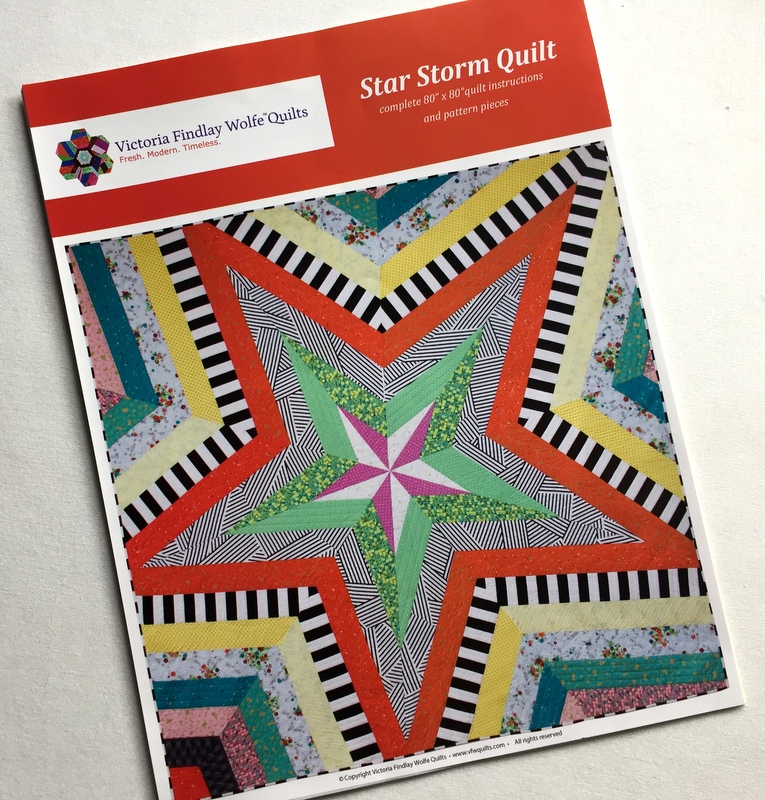 Barbara asked for my help in enlarging this 80″ square quilt to fit a queen-size bed. I wanted to discuss my ideas with Victoria or a member of her staff. Victoria was vacationing with her family in Japan last week so I met with Kim, who was extraordinarily kind and helpful. She gave me a great idea that I can’t wait to share with Barbara.

Even without an agenda, the trip to the shop would have been worth it. So much color, whimsy, and quilting loveliness packed into a relatively small space! 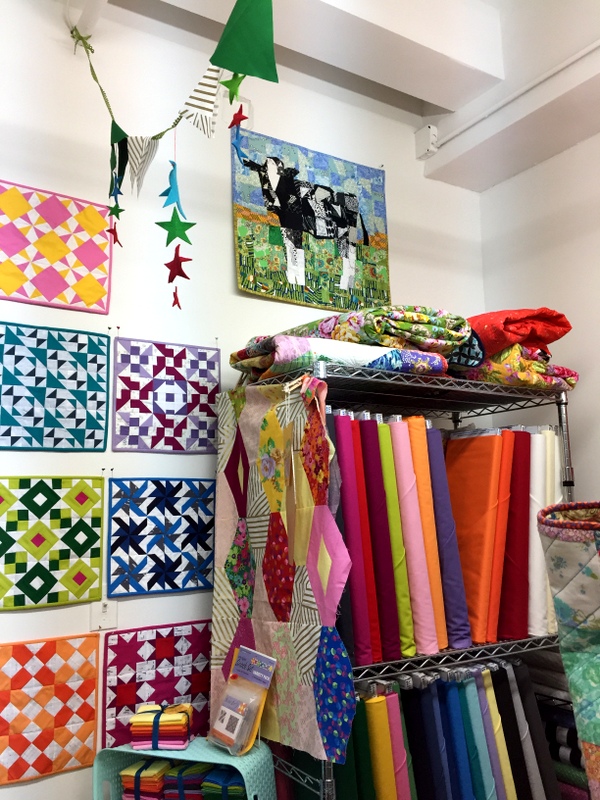 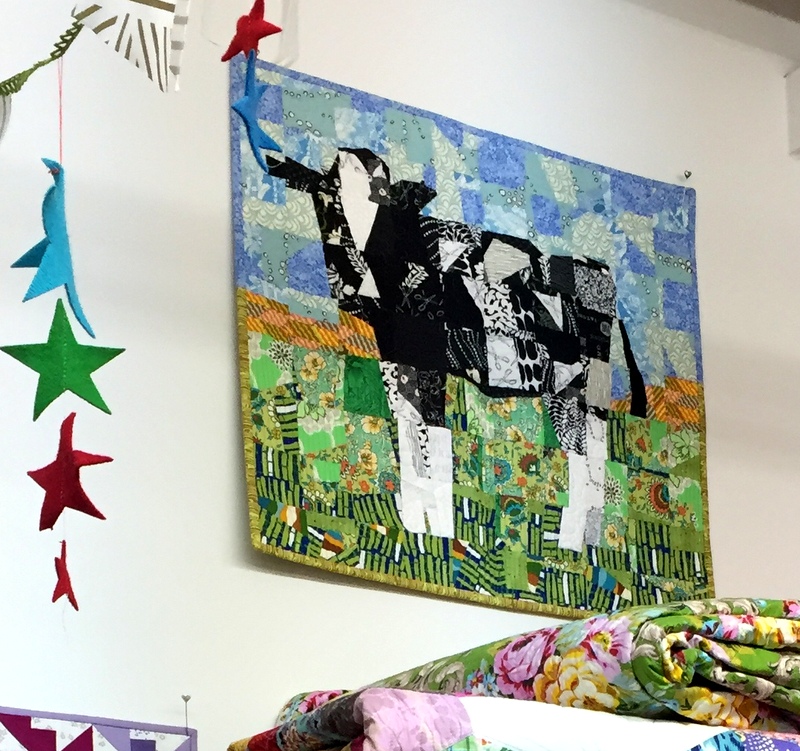 Here is Victoria’s Victory Block quilt and a Dresden Plate block featuring some of her new fabrics: 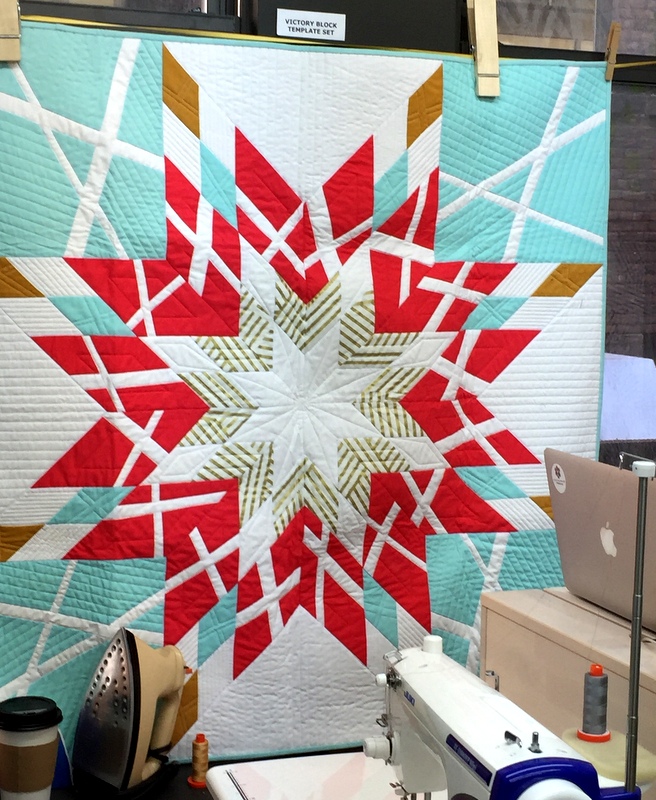 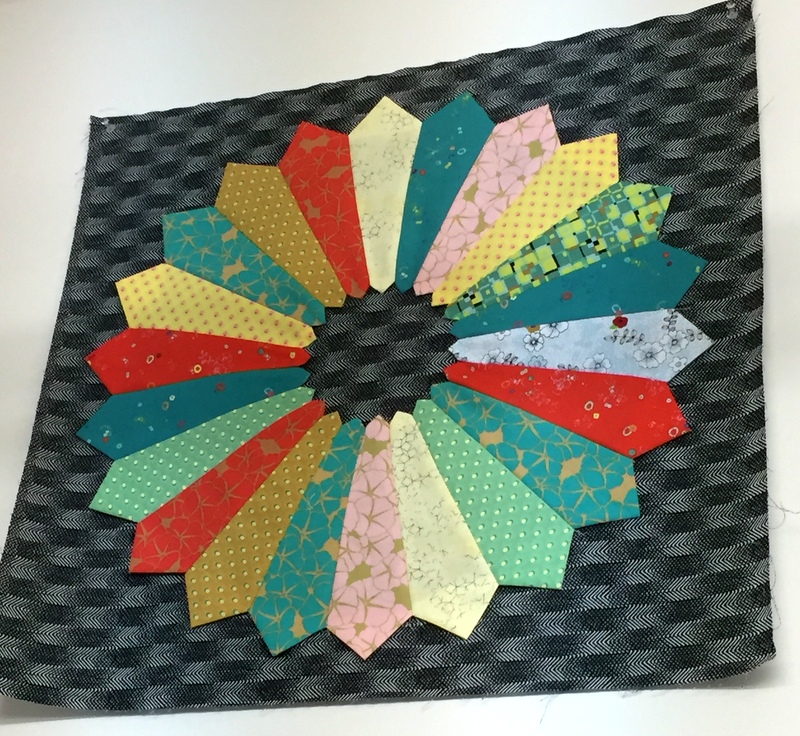 I was excited to see a different version of Star Storm on display: 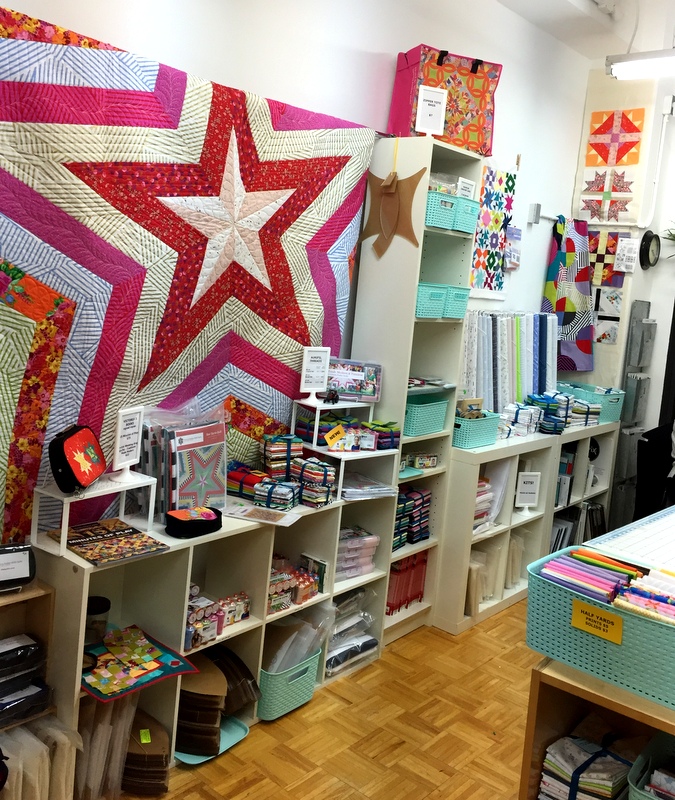 Here’s a close-up of the quilting: 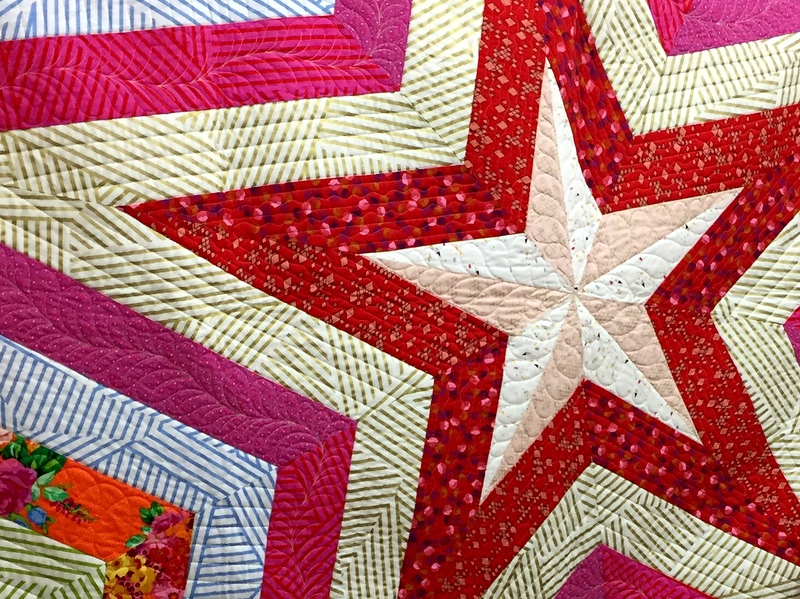 I find the combination of straight lines (both horizontal and vertical) and feathers very pleasing.

You can bet that Victoria Findlay Wolfe’s shop will be on my list of places to visit on future trips to New York City.

Just so you know: the DH did just fine without me, though he is happy to have me home. He’s scheduled for hip replacement surgery April 11, which happens to be our 36th wedding anniversary.

14 Responses to NYC and VFW