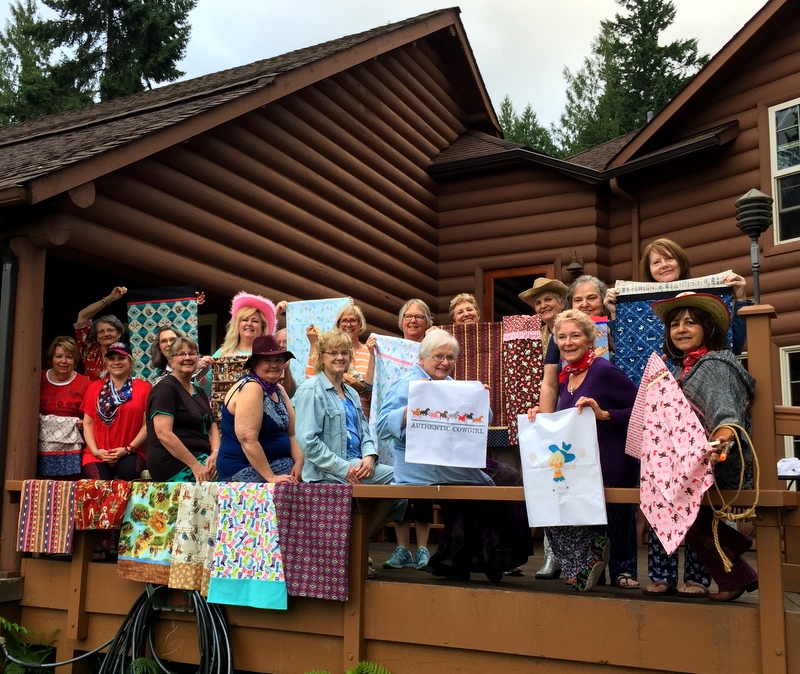 Don’t these quilters look happy? This photo was taken the first evening of the Pine Needle Quilt Shop‘s retreat last month in Union, Washington just after completing a pillowcase exchange. The retreat had a western theme, which is why you see cowboy hats, boots, and bandana prints on both people and pillowcases.

The retreat was held at St Andrews House, a retreat and conference center run by the Episcopal Church of Western Washington. I had the pleasure of teaching for the Pine Needle at St Andrews House last year and returned this year for two back-to-back retreats.

What a lovely spot for a sewing/quilting getaway! The house sits above Hood Canal and offers commanding views of the Olympic Mountains. This is what you see from the long porch that runs along one side of the main building: 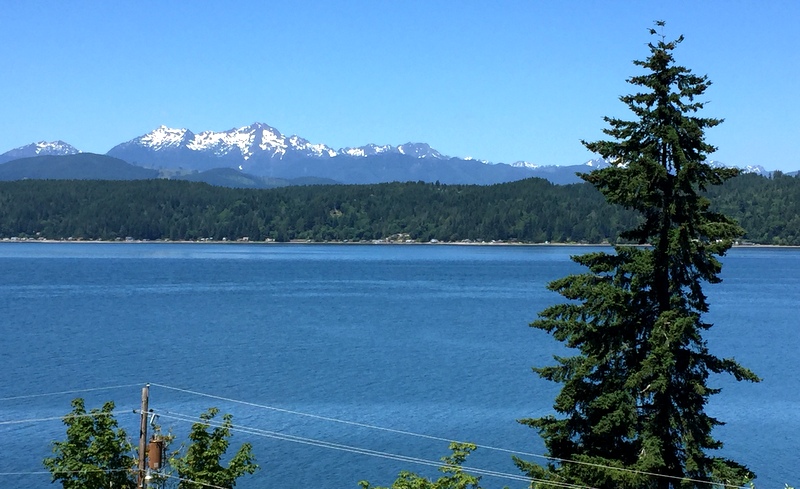 I stayed with Geri, owner of the Pine Needle and organizer of the retreat, in Bayne Cottage, a little house below the retreat center also owned by the church. Every morning before walking up a short (but very steep) hill to the retreat center, I had coffee on the deck that sits right over the water when the tide is in. This was my view: 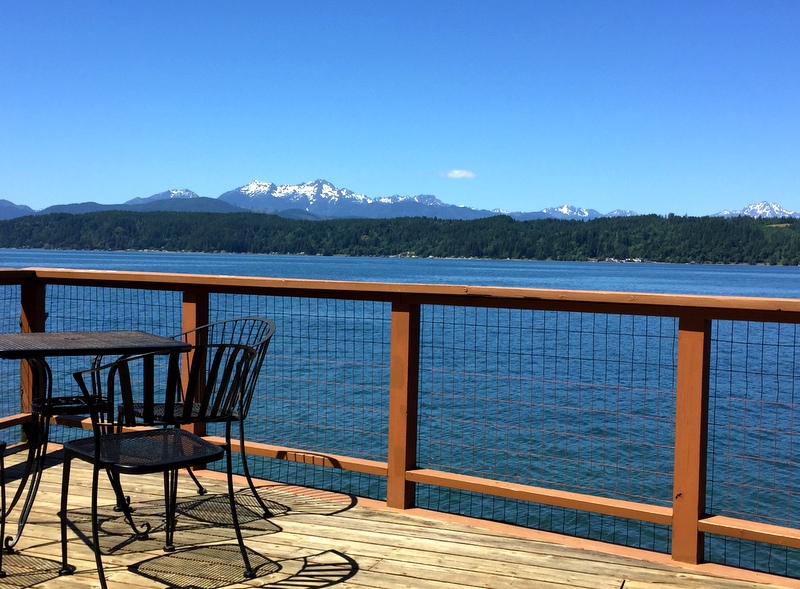 The design I chose for this year’s retreat was Mini Mod Tiles by Sew Kind of Wonderful: 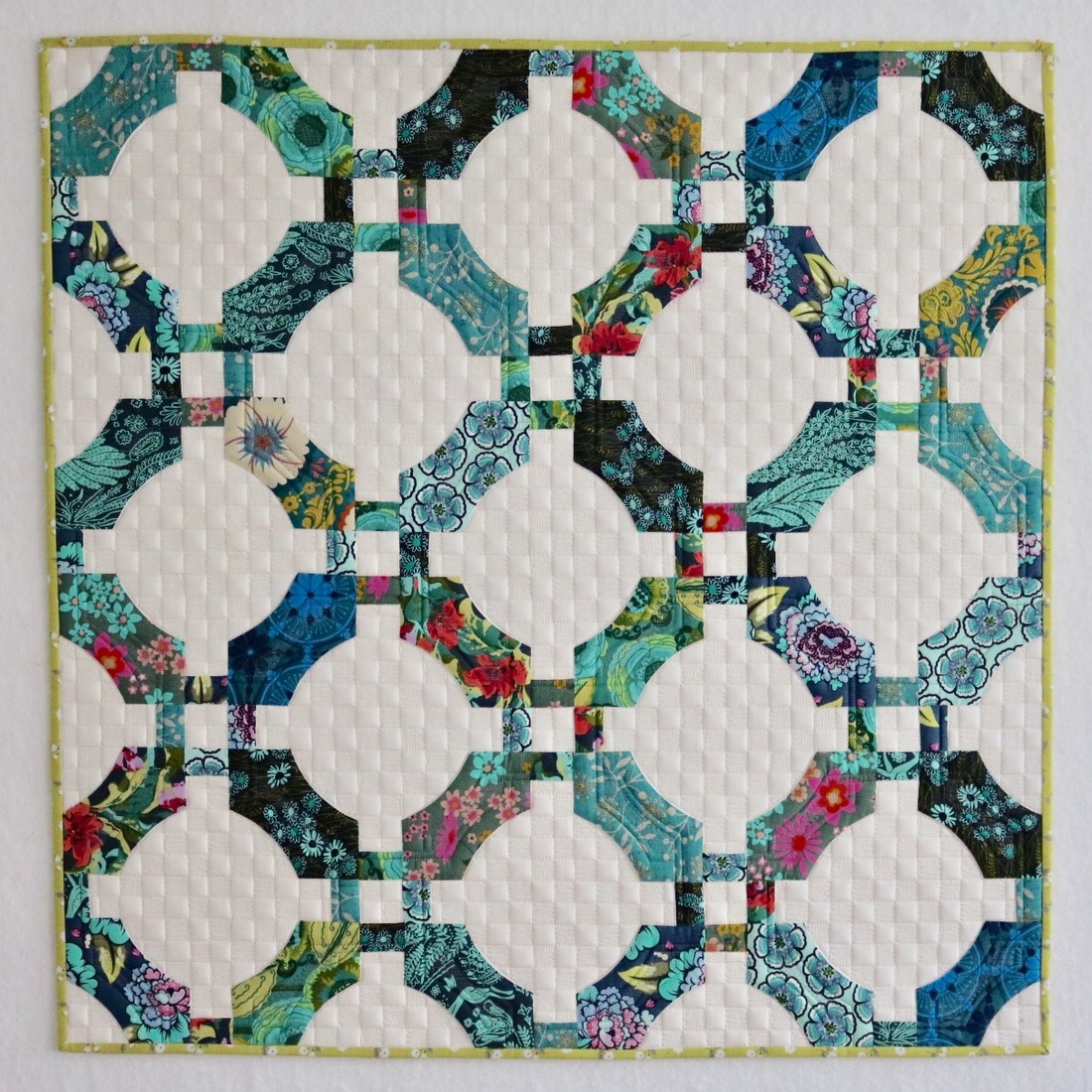 This is the quilt that appears on the SKW website. It was made with the QCR Mini, the smaller of the two specialty curve rulers designed by Sew Kind of Wonderful. The block finishes at 10½” and the entire quilt finishes at 35″. Did you know the pattern is a free download? You can find it here.

I decided to “supersize” the block so that the quilt could also be made with the original Quick Curve Ruler. That way I could offer my retreat students two options. Here are my two test blocks, one finishing at 10½” and the other finishing at 18″: 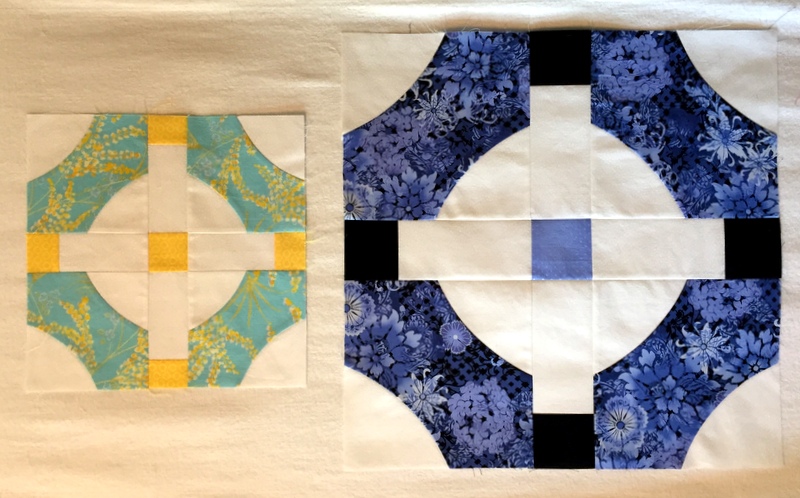 In no time at all, my students were sewing curves the Sew Kind of Wonderful way: no pinning! The fabrics are cut slightly oversize and trimmed so that when the block components are sewn together, they fit the way they’re supposed to.

Here are the first three blocks: 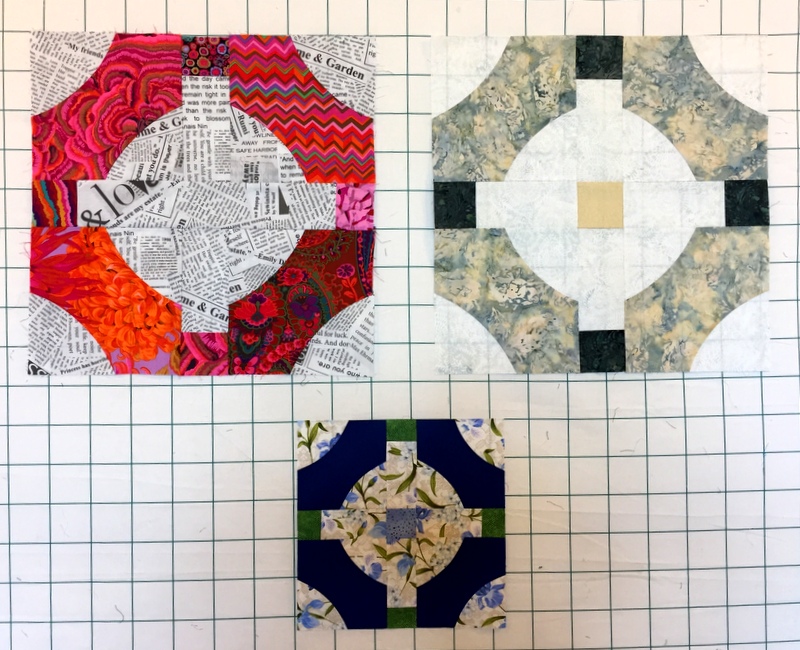 The blocks in the top row were made by Diane and Lynn. We were all dazzled by Diane’s choice of Kaffe Fassett prints combined with a bold text print for the background. Doesn’t Lynn’s block look like real tile? She chose the perfect batik for her focus fabric to get that effect. Lynn’s sister Karen made the block in the second row. She reversed the usual placement, using a lovely floral print for the background and a dark blue solid where a print would normally go.

As the first day progressed, the number of blocks on the wall quickly increased: 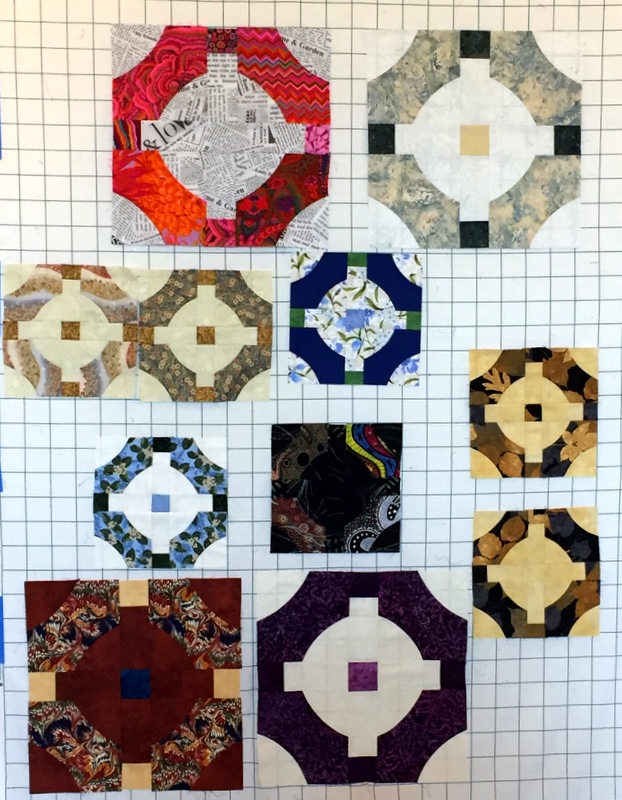 The new blocks were made by Denise (Asian fabrics in second row), Colleen (aboriginal fabrics in third row), Puff (autumn colors on the far right side of photo), Marti (marbled print with rust background in lower left), Tamara (rich purple batiks in bottom row), and me (blue and green holiday print in third row). As you can see with Puff’s two blocks on the right, one block was made with a contrasting center square and one without. Puff decided she liked the top version better.

I told the students, “Once you have your curves sewn and trimmed, I think you’ll be pleasantly surprised how quickly the quilt goes together.” When I came to the classroom on the morning of the second day, I was flabbergasted to see a finished quilt top. Kay had finished hers the evening before! 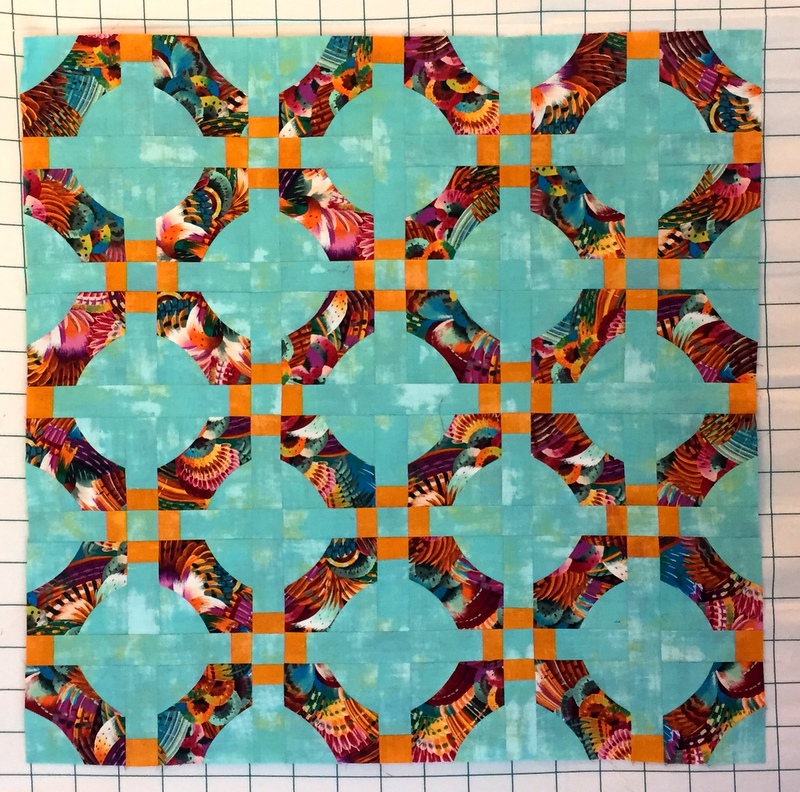 As always, it’s so fun to see the different fabrics that students choose. Candyce’s blue and white fabrics are Shibori prints: 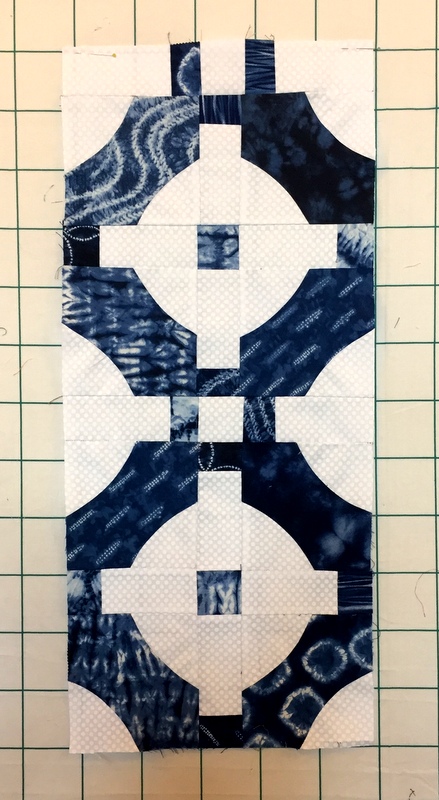 Susie’s focus fabrics are from the Marks line by Valori and Jean Wells. She found the perfect background fabric from another line to go with them: 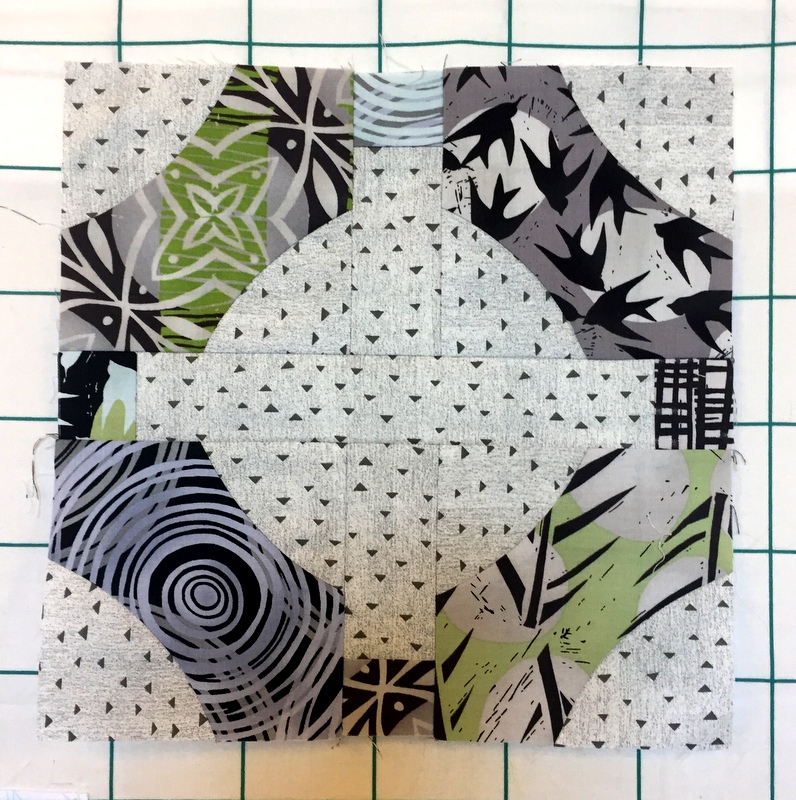 Best friends Martha and Sandy wanted to make a different Sew Kind of Wonderful pattern, Metro Rings. That was fine with me, as I’ve made Metro Rings myself and could offer them some special tips. This block represents a joint effort, as they are using the same fabrics. See how the big block is made of four smaller ones? Two of them were made by Martha and the other two by Sandy. The four blocks haven’t been sewn together but you can see that their points of the triangles in the center are going to come together perfectly: 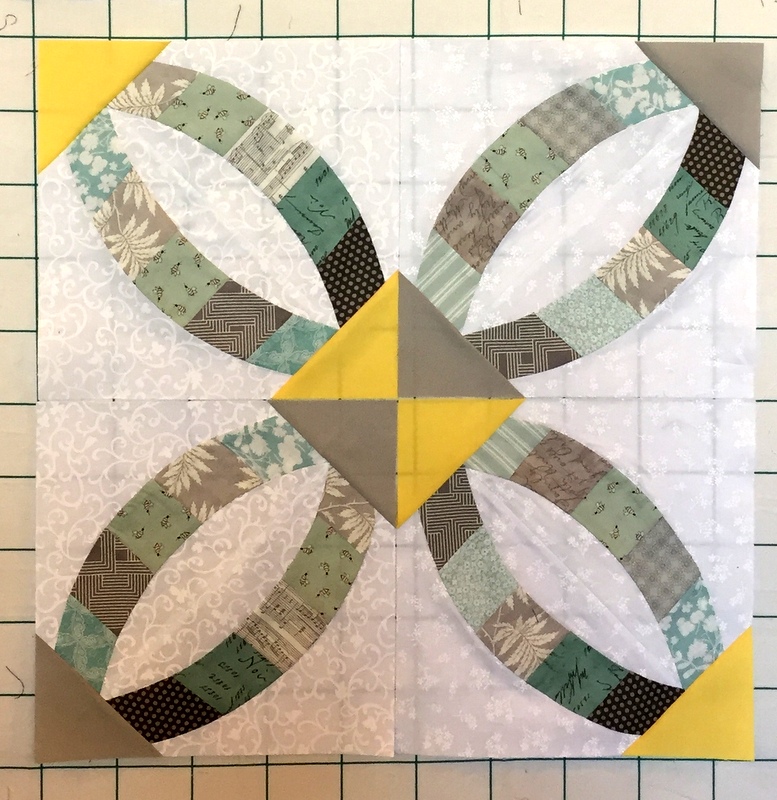 Here is Linda’s supersized version of Mini Mod Tiles, made in one of my favorite color combinations, green and purple: 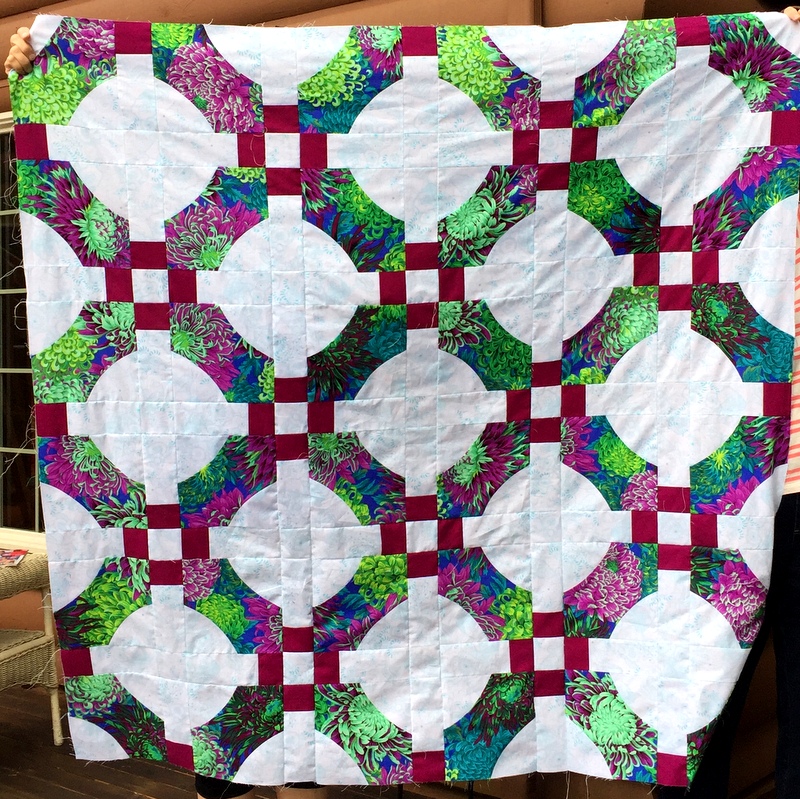 I had suggested that students making the supersized version save their fabric scraps, as they’re large enough to be used in something else. Linda proved my point. She sewed four curvy scraps together and then trimmed them to make an hourglass block. Five hourglass blocks (see the center block?) then became part of a larger nine-patch star block: 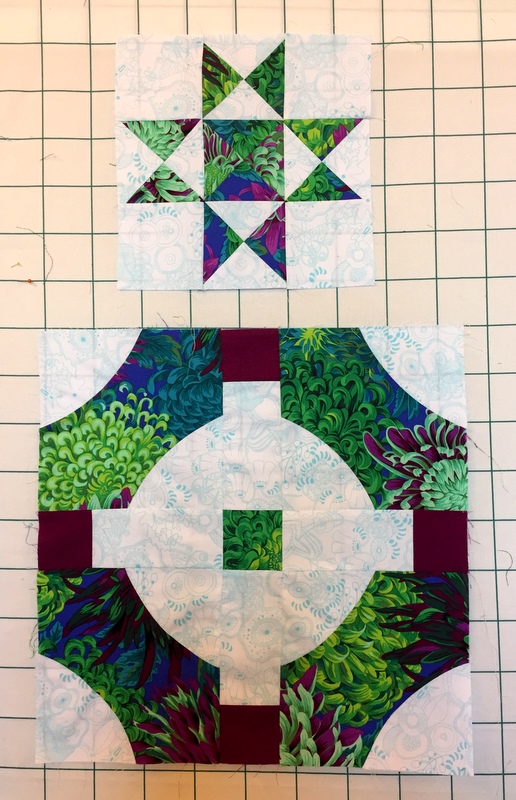 Jan had a charm pack of 5″ squares in grey and white prints, pairing them with white and yellow to great effect: 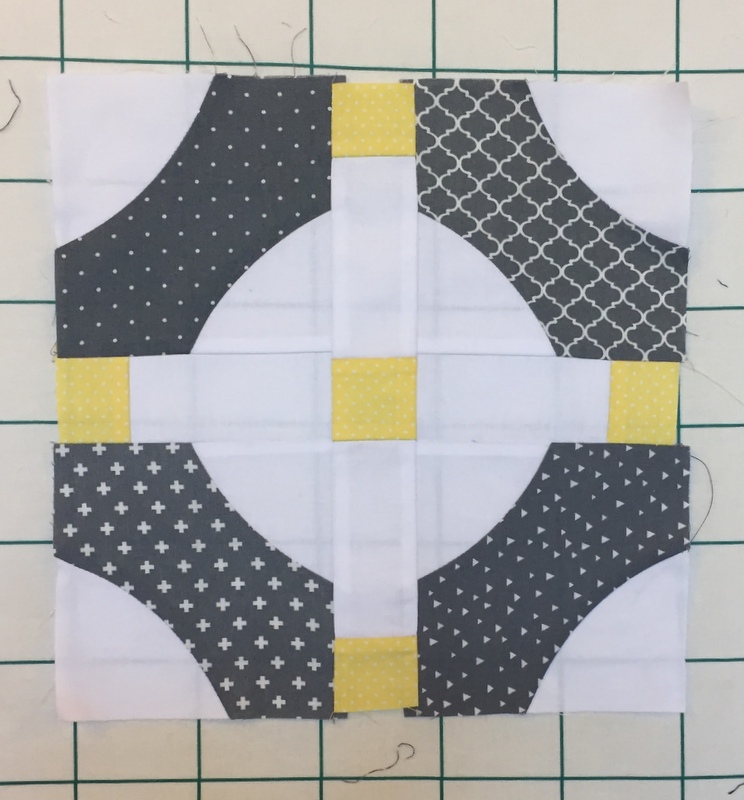 Kitty used that same fresh color combination in her runner:

She added a border of her yellow accent fabric. See how the edges of the runner have been cut to match the curve? That was an option I suggested to accentuate the curve within the block. Kitty will bind her runner in the focus print which will give her runner nice definition.

Here is Kitty’s sister Puff with her lovely runner: 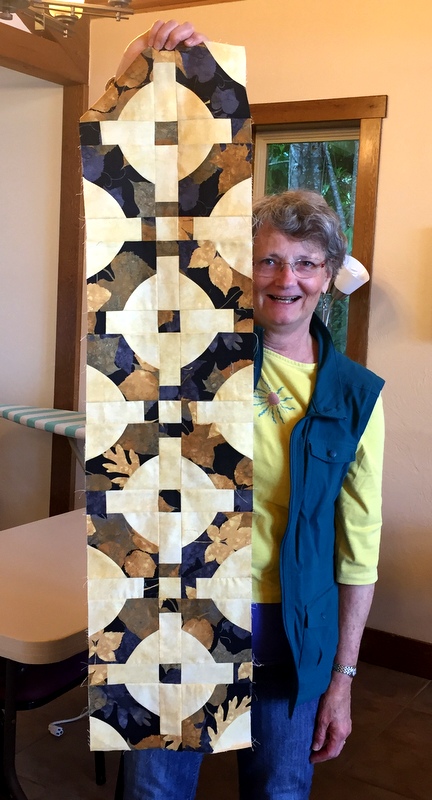 She’s going to make a set of napkins from the print to go along with the table runner.

We had three sets of sisters at this retreat! Marti came all the way from New York to join her sister Vicki. Here are their bold and beautiful supersized blocks: 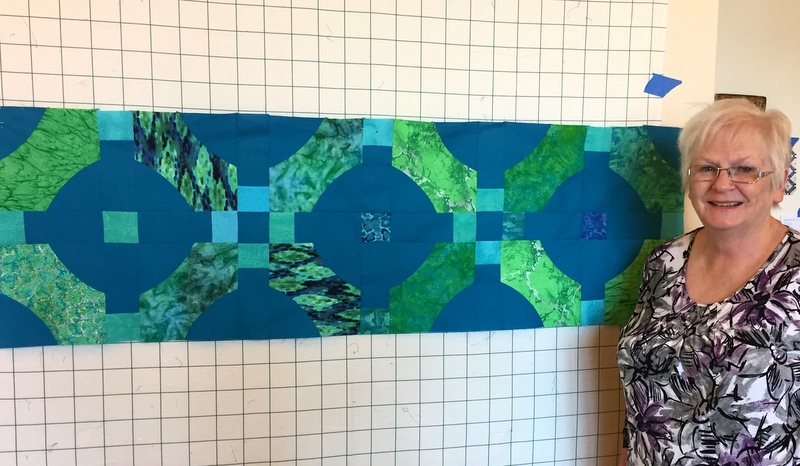 I also cut curves on the runner I made at the retreat:

When I bind this in the dark green, the curved ends will really stand out.

My plan was to snap pictures on the last day of all the quilters with their projects but alas, that didn’t happen. Still, I think you have an idea of the many wonderful ways in which Mini Mod Tiles can be interpreted. Sometime this fall the Pine Needle will have a reunion for retreat participants. Many of these projects will be completed by then and I promise to get some good pictures.

In my next post you’ll see more versions of Mini Mod Tiles, including some supersized ones, made by the second group of retreat participants. Do come back to see!