. . . my Uptown Funk neighborhood, that is, which now has doors and a few windows: 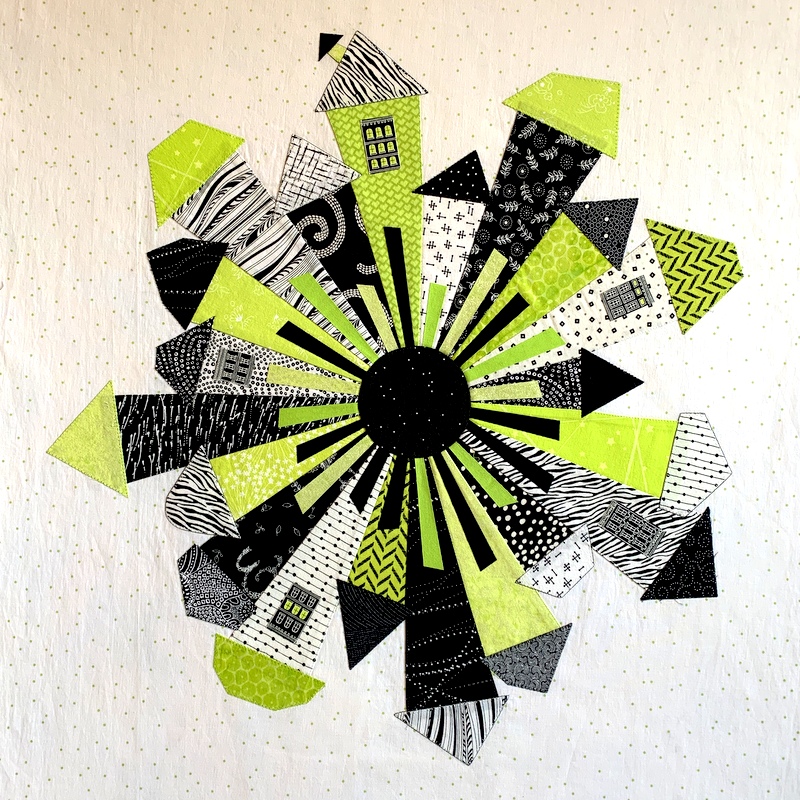 I wanted the long skinny doors to really stand out, like rays radiating from a sun, so I cut them all from black and green solids. I thought the effect might be diluted if I used prints.

I was planning to use the same solid fabrics for windows. If you look at the Dresden Neighborhood pattern by Kim Lapacek that my neighborhood is based on, you’ll see that all the buildings have doors and windows:

My plan changed when I happened upon a piece of fabric in my stash of a cityscape with a variety of windows — in the perfect color combo of black, white, and green. Of course I had to audition them! I fussycut just a few sets of windows and placed them randomly around the circle of houses.

The windows weren’t printed on the straight of grain so they’re all a little bit wonky. Perfect for my wonky little neighborhood. Here’s a close-up:

Oh, and see the little chimney? It’s the only one in the neighborhood. It’s covering up the smudge of dirt I pointed out in my previous post about this project. I stitched around the base of the chimney with black thread so it would stand out a bit more, and I also added a row of black stitching around the roof. I stitched around the other four roofs that had a lot of white in them after noticing that they blended into the background fabric too much.

I’m thinking windows on only five of my houses may be enough. What do you think?

6 Responses to A Beautiful Day in the Neighborhood . . .