Isn’t that a lovely block design? It’s called “Quatrefoil,” which means four leaves, and it’s been around a long time. I’ve had my eye on this block ever since a student pointed me to Jenny Doan’s tutorial on the Missouri Star Quilt Company’s website. Jenny’s demo features a charming quilt made from precut 10″ squares from a single line of fabric.

I made one 12″ block — dressed up with a fussycut center — to add a little pizzazz to a quilt backing: 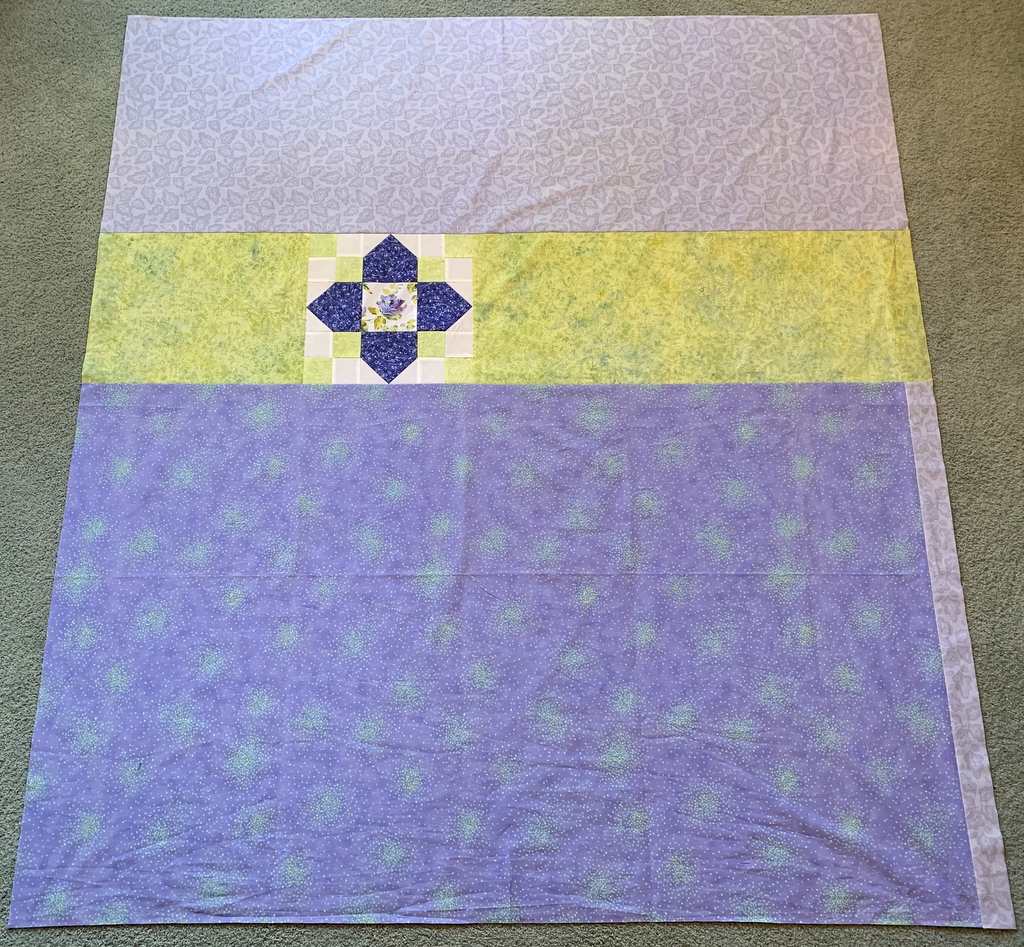 The block really deserves to be showcased in a full quilt because the four-patches in the corners form a secondary pattern. If you search for “quatrefoil quilts” on Instagram or Pinterest you’ll see some wonderful examples. My singleton quatrefoil really doesn’t do the quilt block design justice.

The backing you see above was made for the the quilt top I showed you in my last post, the one with snowball blocks and nine-patches that languished in my sewing room closet for a good dozen years. It was sandwiched and partially quilted but I never got very far with it. When I decided to have it quilted by a professional longarm quilter I knew I’d have to make a new backing because longarmers require four extra inches of batting and backing on all four sides to make sure the layers of the quilt can be loaded properly on the frames of their quilting machines. Quilters using their domestic sewing machines typically don’t need to do that.

Even if I had wanted to finish the original quilt sandwich myself I would have needed a new backing because there were two fade lines in the backing fabric where the quilt was folded. I have no idea how those fade lines got there because as far as I recall the backing was never exposed to sunlight. Can fadelines occur in dark closets?? Inquiring minds want to know.

In any case, I was able to salvage part of the original backing fabric and added a couple of other pieces from my stash that work well with the fabrics on the front. The quilt top and back were delivered today to Karlee Sandell of Sewinspired2Day to work her magic. I expect I will have something to show you very soon.

This entry was posted in Quatrefoil, snowball blocks, update. Bookmark the permalink.