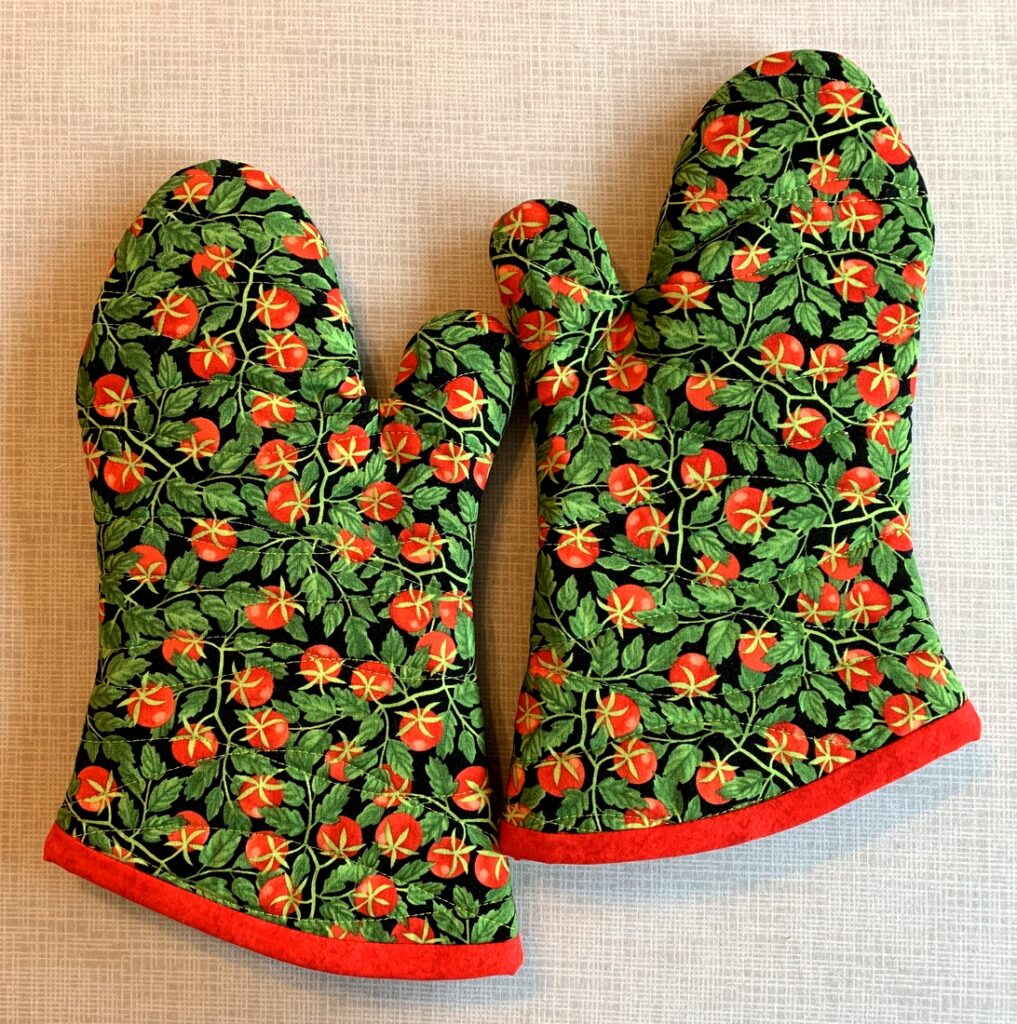 The prequel to the tutorial, that is.

My oven mitt tutorial is almost ready to go. Before I hit “publish” on the post, I want to give you a bit of background (by way of explaining my obsession with making a beautifully finished oven mitt) and a couple of hints on making a pattern for a mitt that fits your own hand.

For the last three or four years I was on the lookout for new oven mitts but was never able to find suitable replacements. The ones in stores were either too big or poorly made, sometimes both. My twin sister Diane was in the same boat. We actually bought our mitts at the same time years ago and they had definitely seen better days. We were bemoaning the lack of good store-bought oven mitts around Thanksgiving last year. At that point I decided to make my own — and make a pair for Diane to boot.

In preparation I went online and checked out several printed tutorials. Boy, was I surprised! Some of the tutorials were way too much work. Some had you cutting out left and right hand patterns. Why on earth . . . ? The mitts are the same shape on both sides, for heaven’s sake.

Others had you make two mitts – one from the main fabric and one from the lining fabric; you inserted the lining mitt into the main mitt and sewed the two together, meaning you were doing twice as much cutting and sewing – and not even getting a mitt that was quilted all the way through. Not one tutorial gave what I considered good instructions for a nicely finished cuff edge made with a contrasting fabric.

There had to be a great method out there somewhere, I thought, and if I couldn’t find one – well, I would just have to figure one out for myself. But I needed a pattern to get started. I downloaded a couple of free templates. When they were printed I could tell they were too big. What to do? Why, make my own pattern.

I simply traced around my favorite old mitt on a piece of freezer paper: 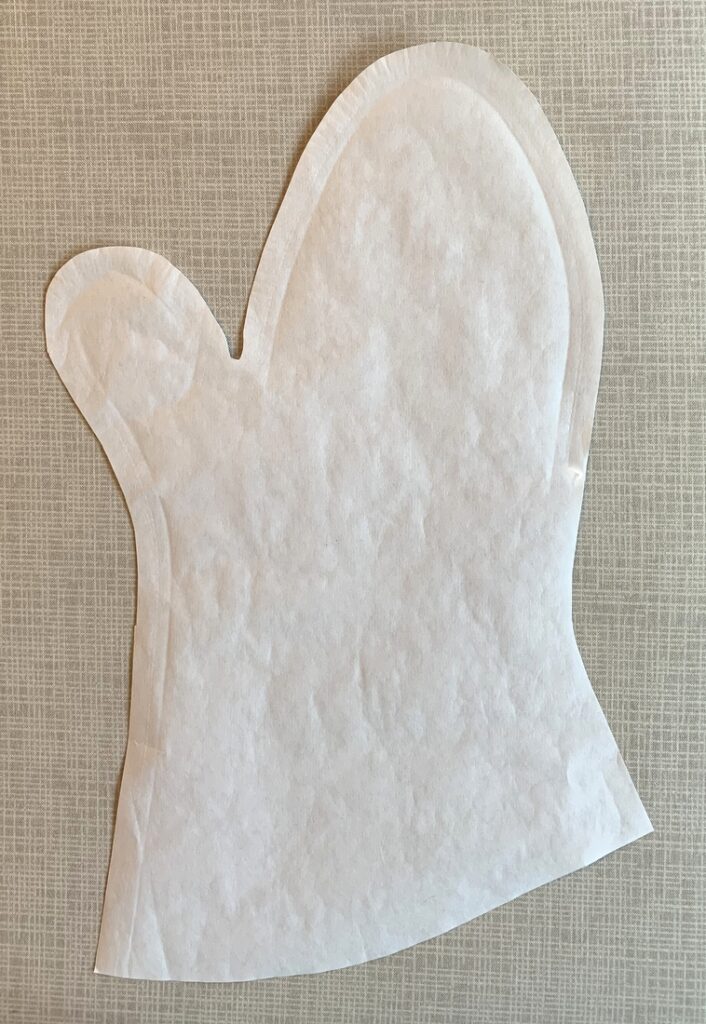 Did you notice that the pattern is flared at the bottom? That makes the mitt easier to slip on if you are wearing a garment with long sleeves.

For those of you unfamiliar with freezer paper, it has a shiny coating on one side that allows it to be ironed temporarily onto fabric. No need to use pins. The freezer paper can be peeled off easily, leaving no residue — and it can be used over and over again. The best place to get your freezer paper? The grocery store! The only brand I’ve ever seen is by Reynolds Kitchens. Crafters and quilters love it.

Combining what seemed to be the best elements of some online tutorials, I made a test mitt. That was the easy part. The hard part was applying the binding strip around the cuff edge. The opening of the mitt is relatively small, presenting a challenge first in moving it under the needle of the sewing machine and then in joining the raw edges neatly. Most tutorials are maddeningly vague about this step or produce results that leave something to be desired.

I experimented with different widths of binding strips and various techniques for joining the ends, making several sets of mitts in the process, including this early pair for Diane: 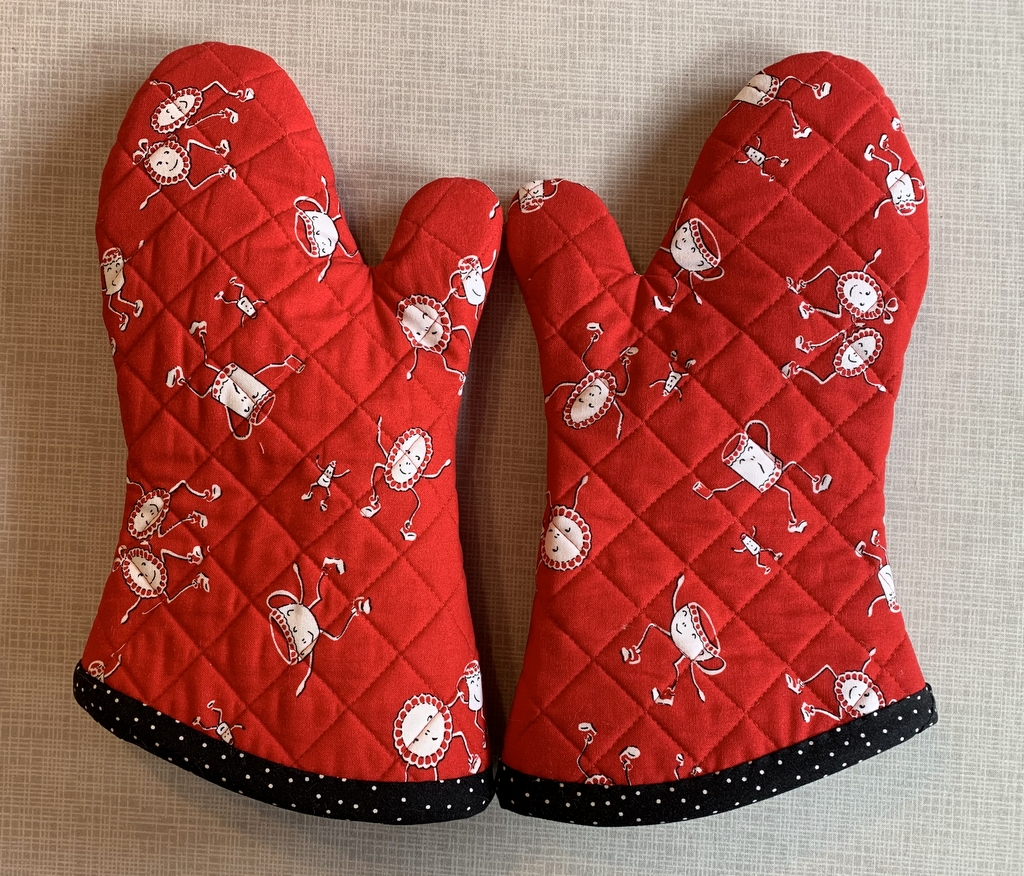 The results were satisfactory . . . but I was looking for something more. The best solution came to me last month in a “what if?” moment. It seems so obvious now.

Want to know my secret? A partial seam! 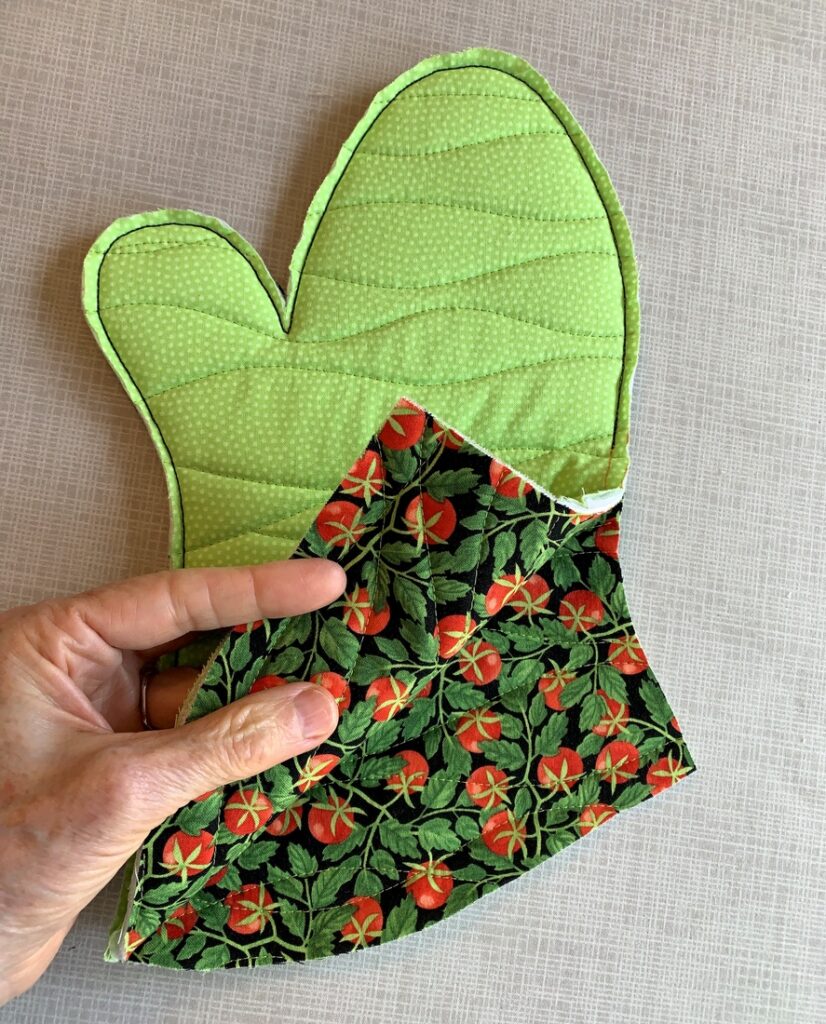 That’s right. By leaving one side seam only partially sewn, there was more room around the cuff edge to manipulate the fabric while applying the binding strip. And then I could finish sewing the side seam, which now includes the binding strip, giving me a beautifully finished mitt when the strip was turned down and tacked to the inside: 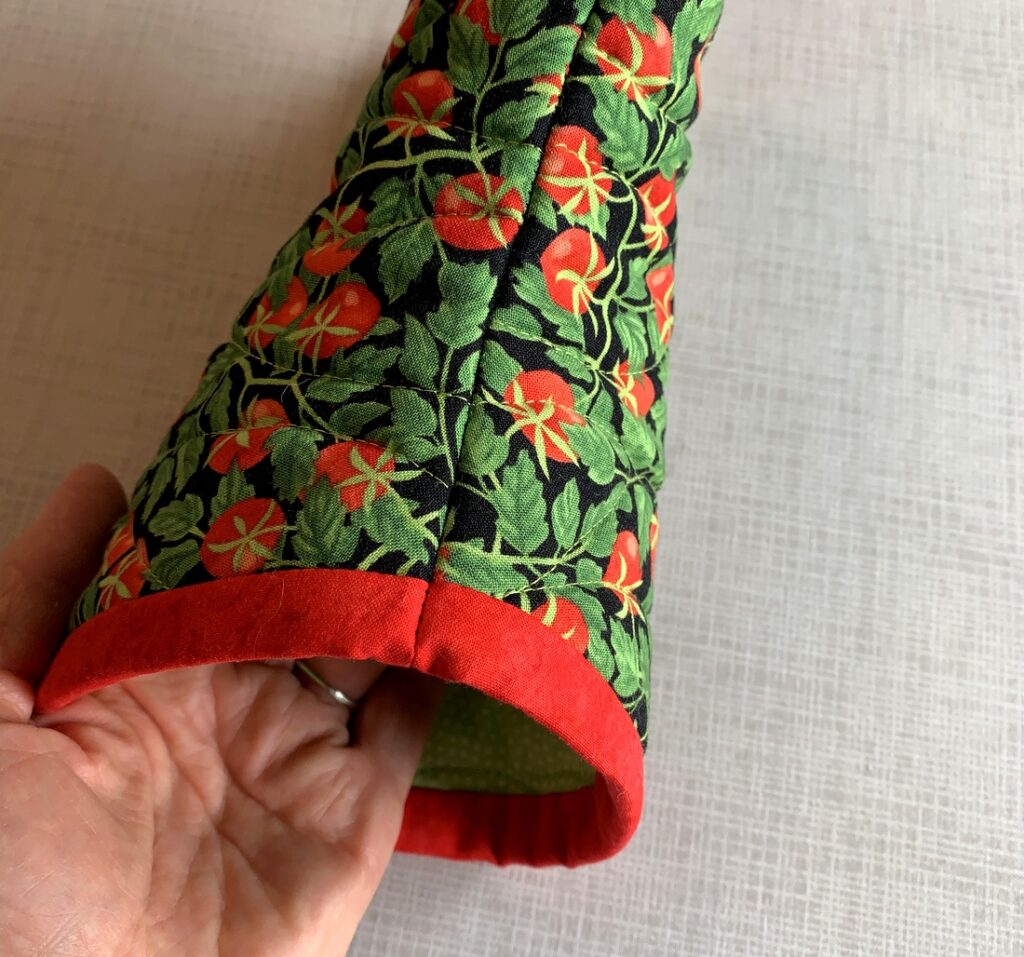 Are you intrigued? Want to make your own? I hope so!

My tutorial will come with a link to a printable template so you can make your own freezer paper pattern. Or you can do what I did and draw around a mitt you already have. If you use my pattern you can modify it to fit your own hand. If you make your own pattern by tracing around an existing mitt, you can place your hand on it to test the fit as I do in the photo below. 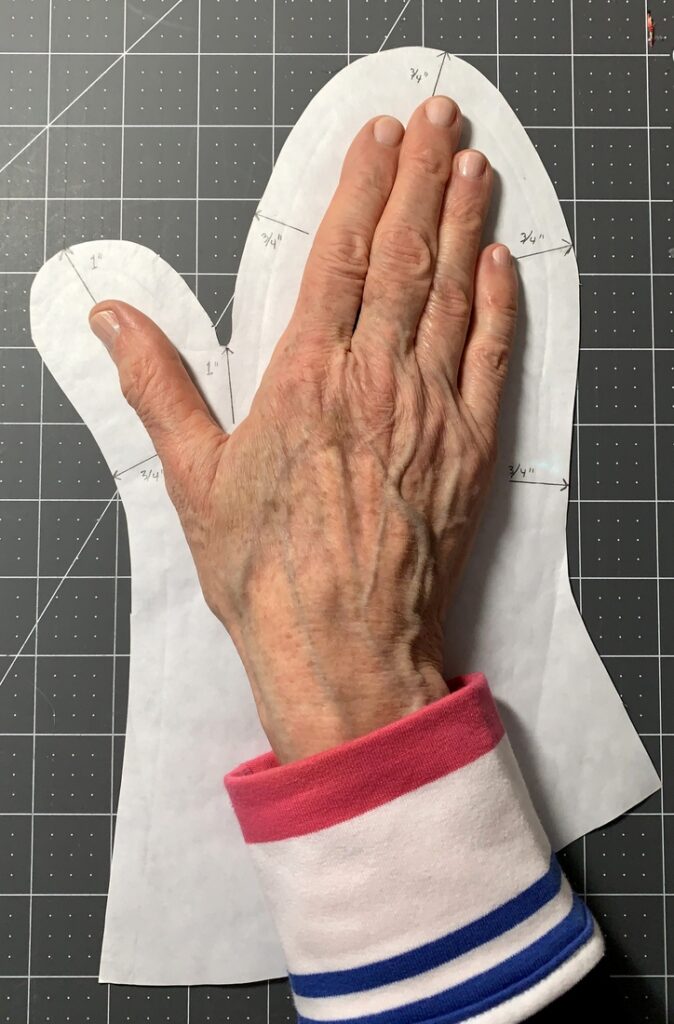 It may look like my hand would be swimming in a mitt that size but you need room to turn the mitt inside out and still have room for the seam allowance.

My tutorial is so detailed and picture-laden that it is coming to you in two parts. Part 1 covers fabric requirements, instructions for downloading and printing the pattern, assembling the layers, and quilting the resulting “quilt sandwich.”

Part 2 covers the sewing of the mitt and band around the cuff edge as well as the final step of tacking the band down.

10 Responses to Oven Mitts that Fit: the Prequel