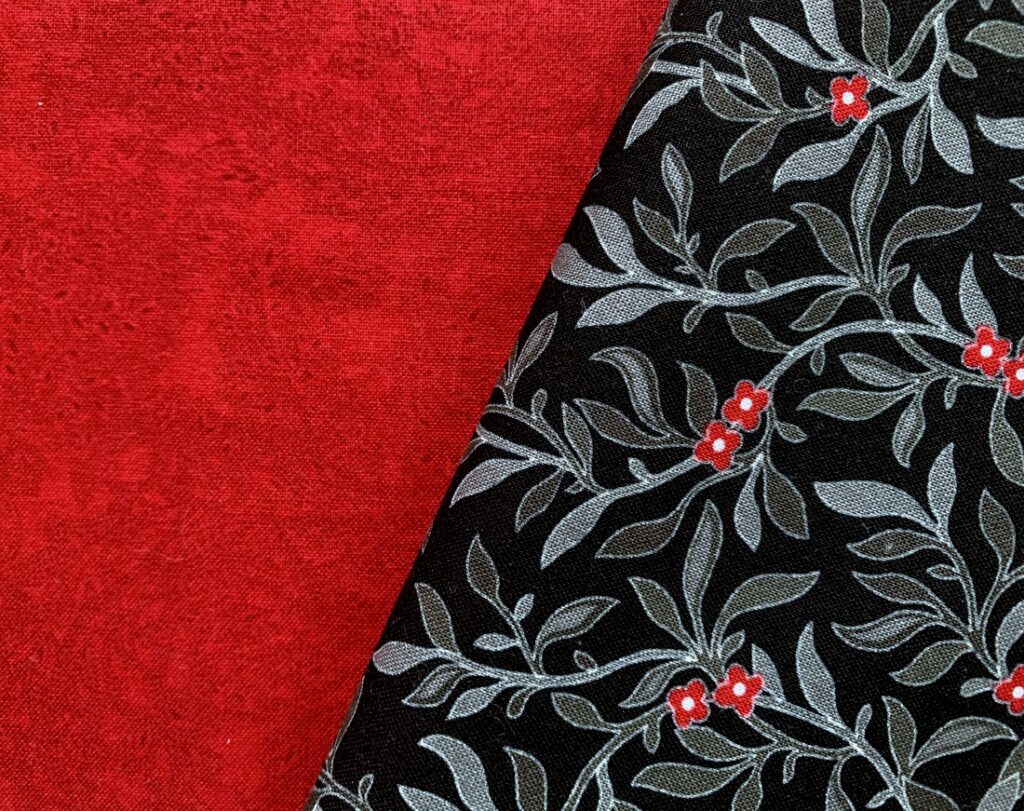 That’s a funny phrase to use when talking about fabric but it perfectly expresses how I feel after finding a quarter of a yard of fabric online that was a total long shot.

In my last post I showed photos of a kaleidoscope quilt I had just gotten back from the longarm quilter. (The quilt, based on the pattern “Grandma’s Surprise,” was made in a class with Joyce Gieszler six years ago.) In the comment section of the blog post, my friend Vickie asked what I was thinking about for the binding. I replied, “I’m going to bind it in the same black leaf print (shown above) that I used for the border because I want the focus to be on the kaleidoscope in the center of the quilt.” My thought was that binding the quilt in solid black or the red paisley tone-on-tone blender used in the quilt (also shown above) would create a frame around the quilt that might distract from the kaleidscope in the center.

But as I pondered Vickie’s question, the thought of a narrow flange of that red fabric sandwiched between the border and the binding popped into my head. Last night I added this sentence to my reply: “If I had more of the red fabric, though, I would be very tempted to add a narrow flange between the border and the binding.” Only two small rectangles of that fabric remained in my stash and neither scrap had selvage information on it. I had bought it years ago and had no idea if it was even still available.

Sometime between last night and this morning, that idea of a flange took hold. I woke up and thought, “Why not see if I can find that red fabric online?” I tried entering several search phrases with no luck. Then I struck paydirt with “dark red on red paisley blender.” Up popped this image. . .

. . . with a link to an online quilt shop in Waukee, Iowa called Twiddletails. The fabric turned out to be a blender by Moda that was part of a line of blenders called Puzzle Pieces. All that was available was a quarter of a yard — a mere nine inches! Reader, I ordered it on the spot. Between this piece and my two scraps, I think I can eke out enough strips for a flange, provided the dye lots are similar enough. There’s a surprising amount of variation among dye lots. This bit of yardage from Twiddletails is the only one I’ve found so my fingers are firmly crossed.

This entry was posted in kaleidoscope quilts, update. Bookmark the permalink.