Here’s the latest addition to my current sampler project. It’s basically a glorified Sawtooth Star but I’m calling it Dawn’s Star because I’ve never seen this particular version anywhere before — except in one of my own quilts. I dreamed it up in 2014 to replace a basic Sawtooth Star block in the very first sampler quilt I ever made, Catch a Falling Star, based on Terri Krysan’s Reach for the Stars quilt. (I still get queries almost every month from quilters looking for her pattern; more on that below).

So why did I choose this block for my current project? Happenstance. You see, Catch a Falling Star is arranged on a quilt ladder in the Annex (the room across the hall from my sewing room) in such a way that Dawn’s Star is the only block you see in its entirety. My eye fell on it the other day and made me want to make it again.

This is my first version of the block, the one made for Catch a Falling Star: 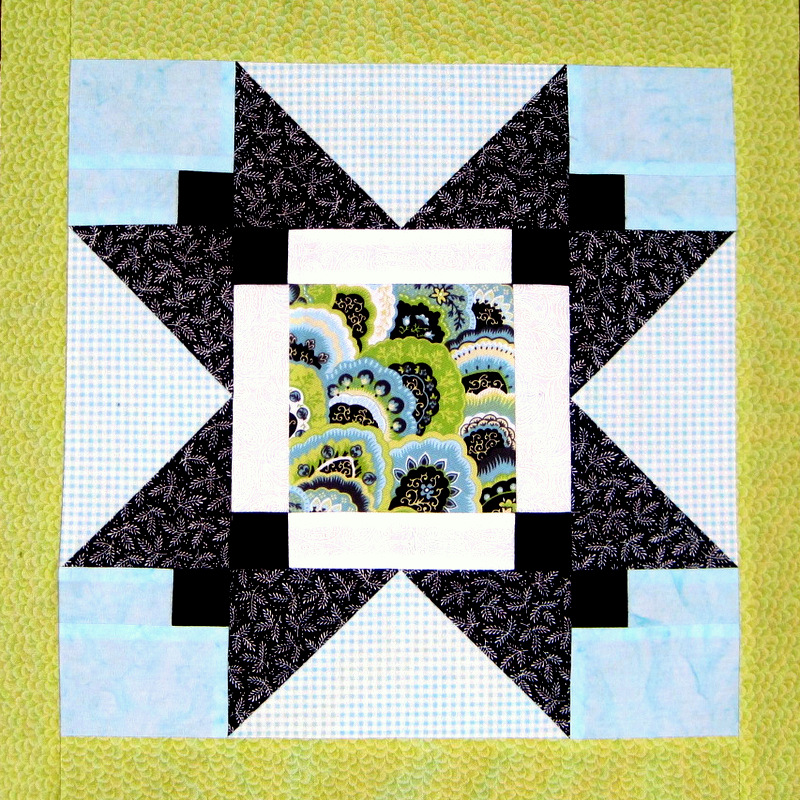 It was designed to be set on point: 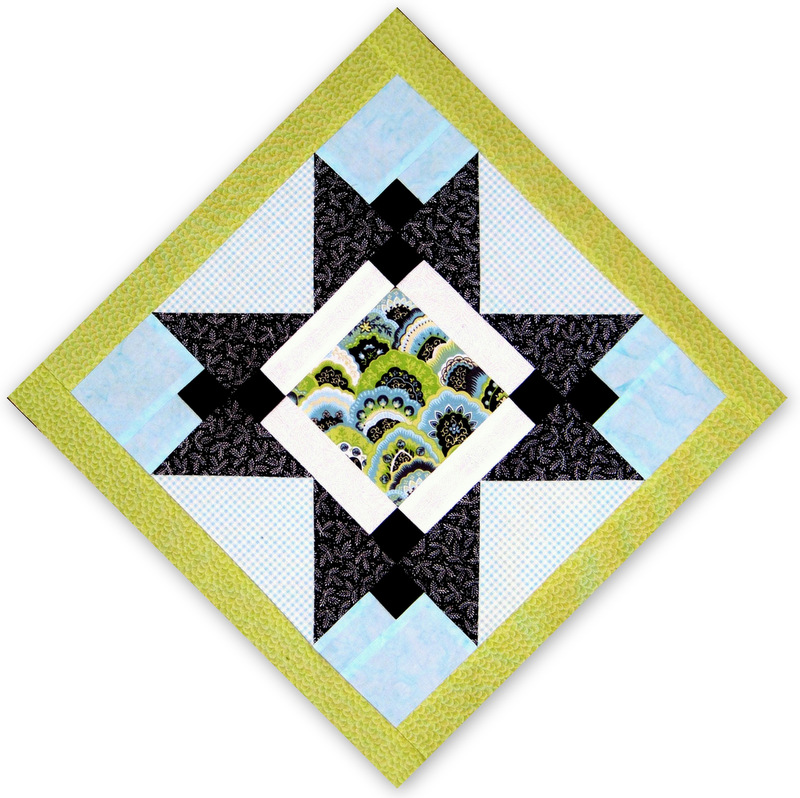 My current version looks good set on point, too:

Setting it on point is still an option as my current project features blocks that will finish at both 12″ and 18″ square. I could easily convert this 12″ block to an 18″ block by adding triangles at the corners. No need to decide yet. It’s still early days in the making of this quilt.

Here’s a glimpse of the blocks so far, arranged randomly on my design wall in the Annex:

The 18″ block in the upper left (Chicago Star) and the 6″ blocks I call Atomic Stars are part of an optional Block of the Month quilt project organized by the kind folks at Montavilla Sewing Center in Lake Oswego for my students and me as we participate in monthly Zoom calls till my in-person classes resume next month.

I’m adding other blocks of my own choosing along with the ones Kristin at Montavilla selected when she designed the quilt. Montavilla has a Zoom call scheduled for next week. My plan is to get one or two of Kristin’s other block choices completed before then. And now that I’ve revisited Catch a Falling Star, I’m thinking about making yet another block I swapped out for one in Terri Krysan’s original design.

Speaking of which, here’s a photo of Terri’s beautiful quilt . . .

Now on to the PSA for people asking about a pattern for Reach for the Stars. This is what I tell them:

“There is no stand-alone pattern for Reach for the Stars. Instructions for Terri Krysan’s quilt appeared in seven consecutive issues of Quilters Newsletter Magazine (QNM), beginning with Oct/Nov 2013 and ending with Oct/Nov 2014 (issues 436-442). QNM ceased publication a few years ago.

“Occasionally you can find single issues for sale on eBay or Etsy. You might also check with a local quilt guild to see if a member has copies of the magazine to sell or loan.

“Recently I learned that a website called Quilting Daily (quiltingdaily.com) sells digital copies of individual issues of Quilter’s Newsletter Magazine. If you go to quiltingdaily.com, click on the search icon (a magnifying glass) and search for those issues. Good luck! — Dawn”

Now, let’s take another look at my current blocks:

Hmmm. See that block on the upper right side? That’s a 12″ block that I set on point and turned into an 18″ block. I really like the block but it needs something more . . . and I think I know exactly what that “something more” is.

This entry was posted in Block of the Month (BOM), Quilt-Along, Reach for the Stars sampler quilt, update. Bookmark the permalink.