My quilt guild held its annual auction last week, selling over 200 items. My goodness, I’ve never seen such an array of generously bundled fabrics along with books, patterns, sewing notions, vintage linens, and even a Singer Featherweight machine. And what did I come home with? This beautifully pieced quilt top: 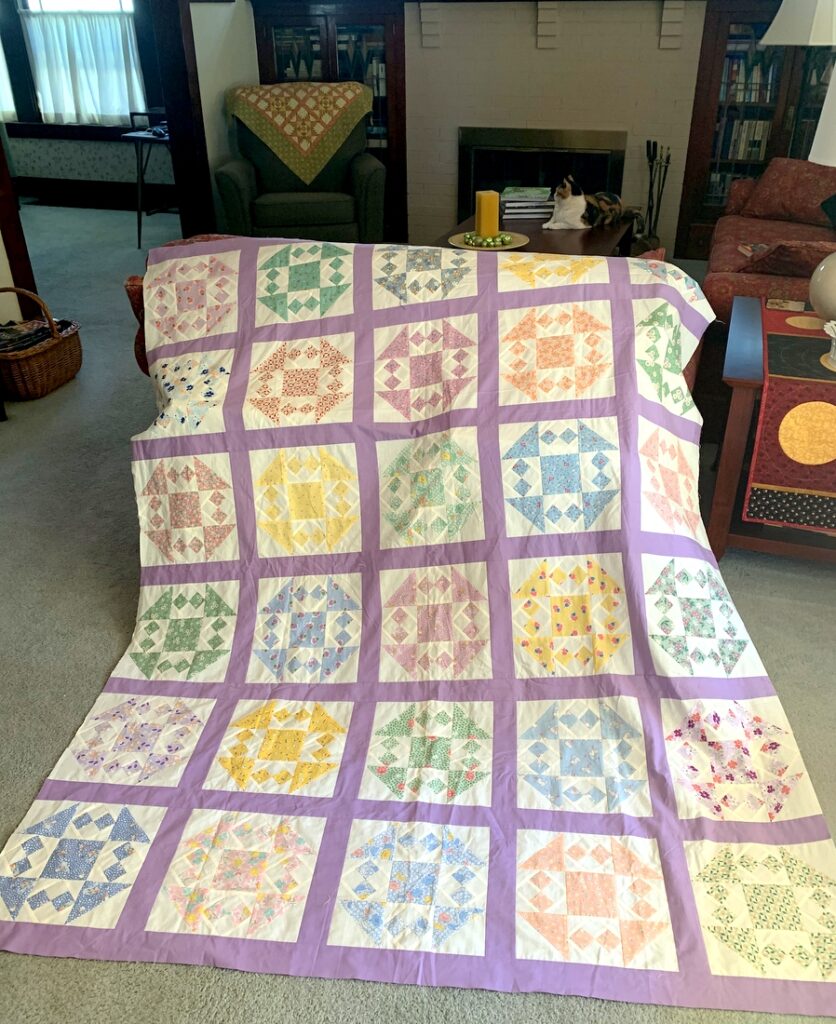 We all know the last thing I need is another quilt top when I have so many of my own begging to be finished, but friends, I could not resist. The final bid was $20 — an absolute steal. Truth be told, I would have paid more but the top didn’t seem to be drawing a lot of interest. Was it because I was hovering in the background willing my guildmates to keep passing it by? I also lingered nearby (inconspicuously, I hope) as the auction drew to a close, making sure no one could squeeze in at the last minute to outbid me.

I have no idea how old this top is or who made it. Judging by the looks of it, the fabrics are 1930s reproductions rather than vintage pieces. What struck me as I unfolded it to get a better look was how beautifully it was pieced. The quiltmaker sewed consistent quarter-inch seams . . . 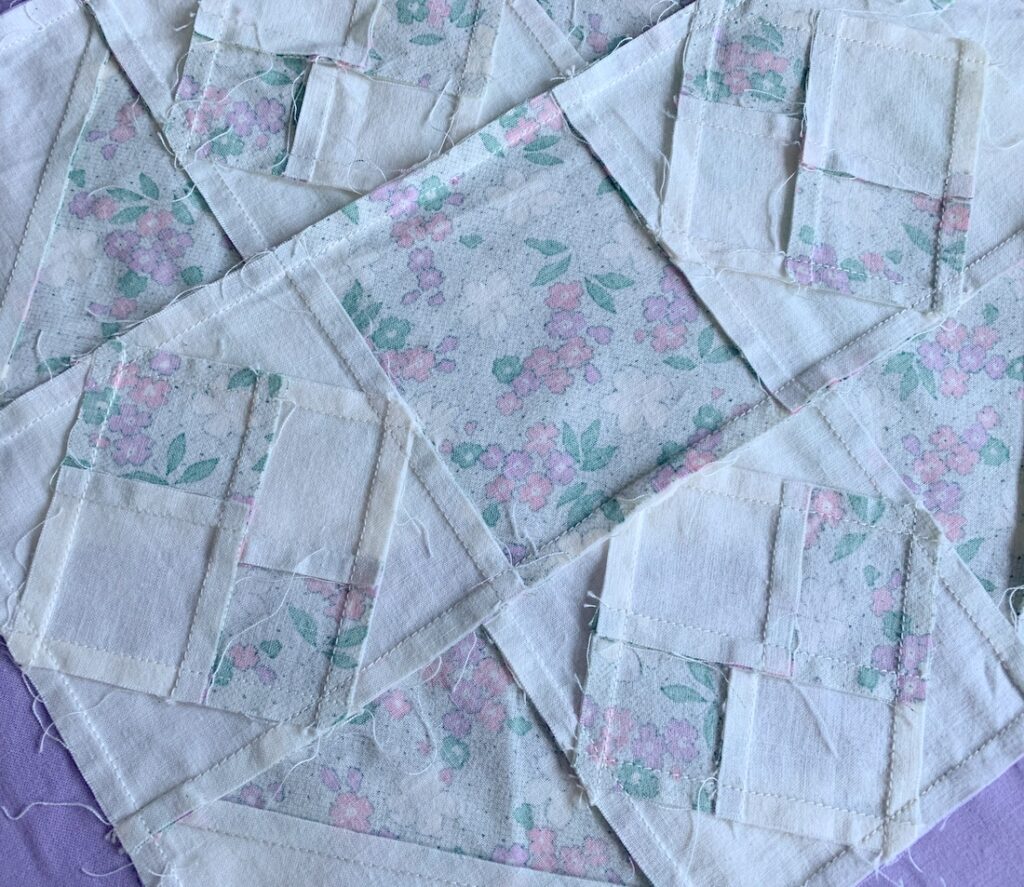 . . . and every single point on the front is perfect as a result:

That makes my little wannabe perfectionist heart go pitty-pat. It also argues for the top being more recent. My guess is that the quiltmaker used a rotary cutter and made very accurate cuts before piecing the top so accurately.

I hadn’t seen that block design before but it seemed to be a variation on the Shoofly block. I did a little research from the best source of all: Barbara Brackman’s Encyclopedia of Pieced Quilt Patterns. Looking in the index under Shoofly, it didn’t take long to find the block, which has several names. It’s known as Richmond, Aunt Vina’s Favorite, Pin Wheel, Butterfly, and Lucy’s Four and Nine: 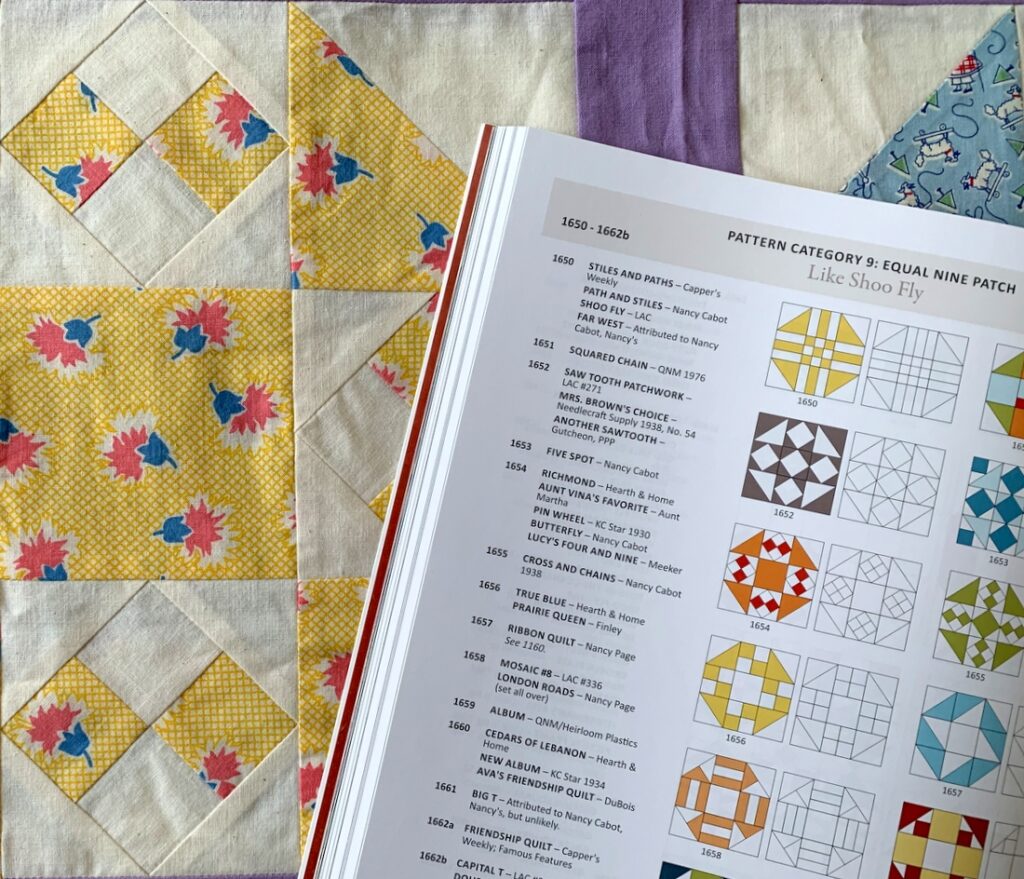 Brackman notes that the earliest publication she has seen for the pattern is Hearth & Home magazine about 1915 under the name Richmond.

The quiltmaker used a 5 x 6 setting, separating the blocks with 2″-wide sashing. The blocks finish at 10½” square, which seems a bit unusual to me. Right now the top measures 61″ wide by 77½” long. But here’s something a bit odd:  there’s a border strip of the lavender lattice fabric on the top and bottom of the quilt top but not on the sides. Look back at the first photo to see what I mean. Could the quilt have been abandoned because the maker didn’t have enough of the lavender fabric to complete the border?

I’ll never be able to find the exact shade of lavender to add side borders. What are my options? Well, I could add side borders with a reasonably close match to the original lavender but in my heart of hearts I know that’s not going to happen. I could remove the top and bottom borders and find a different fabric — perhaps a reproduction print containing many of the colors in the quilt top — to border the blocks. Or I could cut down the lavender fabric on the top and bottom borders and make borders for the sides with what is cut off. Then I could add a larger border of print fabric. Just an idea — but I’m leaning in that direction.

What would you do?

19 Responses to I Couldn’t Resist