I’m late to the party. At the beginning of summer Thelma of Cupcakes ‘n Daisies started a Sew-Along in which participants could make any design using the Quick Curve Ruler (QCR) by Sew Kind of Wonderful. No rules, only the goal of completing the project by Labor Day.

I knew right away that I wanted to join Thelma’s Sew-Along. I’m a huge fan of Sew Kind of Wonderful patterns, designed by sisters Jenny Pedigo and Helen Robinson. They recently designed some patterns for Cut Loose Press, and this one, Dancing Churndash, caught my eye:

Do you recognize the classic churn dash block? Helen and Jenny gave it a playful contemporary spin. I couldn’t wait to make it. The only problem was that the pattern wasn’t yet available when the Sew-Along began in June. Last week the patterns came in at the Pine Needle and I quickly scooped one up.

Like Thelma, I always make a test block before embarking on a project. Here is my test block:

I’m using several fabrics from the Gray Matters line by Camelot Cottons plus some other greys and yellows in my stash. I reversed the values in Jenny and Helen’s version; my background is white and the narrow center strips are dark.

For the narrow center strips I used a Daiwabo cotton sateen that gradates from medium dark grey at the selvage ends to very pale grey in the center. The strips are a little too dark, I think. I may replace them with strips cut a bit farther away from the selvages, hence lighter.

Thelma has already finished her Quick Curve Ruler quilt top, and so have a few others who joined her Sew-Along. Despite my late start I should be able to get my quilt top done before the deadline. After all, Labor Day is still five weeks away!

I’m not really in a bind. I’ve just spent part of the last three days binding two quilts. I really enjoy the process of finishing a quilt by hand-stitching the binding. I’m not bothered by the amount of time it takes; I’m content with either sitting in my sewing room listening to music or settling down in the TV room with a movie I’ve watched so many times I hardly need to look at the screen. I did some of each over the weekend.

My movie of choice was Lonesome Dove, with Robert Duvall and Tommy Lee Jones. It’s actually a miniseries from 1989 based on (and very faithful to) Larry McMurtry’s Pulitzer-Prize winning novel, which I have read not once but twice. I had this picture on my bulletin board at work for many years:

I never noticed before how many quilts were used in Lonesome Dove. Watching this beloved movie again while working on a quilt of my own making was a double pleasure.

Here’s a look at Sunrise Bow-tique, one of the quilts I bound over the weekend:

I wrote about the quilt top in a post last month called Batik Bowties, which you can read here. The top features bowtie blocks with machine appliquéd knots. In the alternating blocks I used an ombre fabric that gradates from pale yellow to burnt sienna.

Nancy Stovall of Just Quilting quilted an allover design of spirals, some with sun rays emanating from them, very much in keeping with the colors and name of my quilt. I’m so pleased with her quilting! Here’s a close-up: 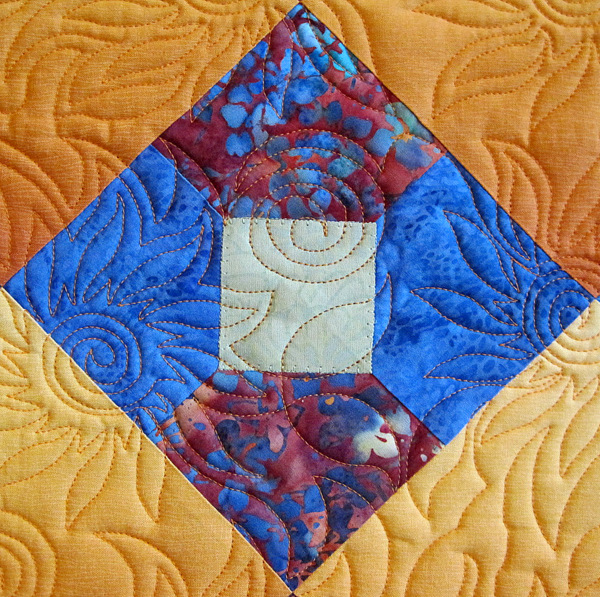 I found this fabric in my stash that seemed perfect for the back:

I still need to take photos of my other newly-finished quilt, Cosmic Kaleidoscopes. I hope you’ll stop by later this week for a look at it.

Here is a little top I just finished that features raw-edge machine appliqué in the bowtie blocks and a gradated fabric in the alternating blocks and setting triangles: 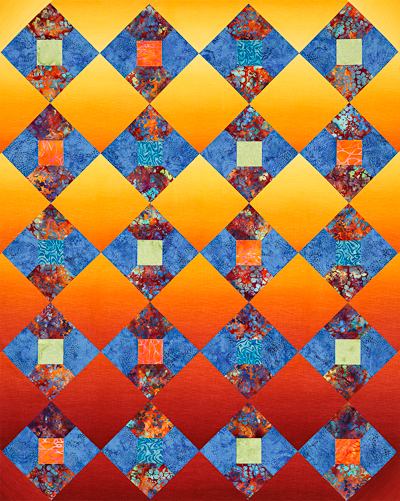 Raw-edge machine appliqué is a technique I avoided for years because of concerns about fabric fraying around the edges. Then in October, Nicole of Sister’s Choice Quilts wrote about machine appliqué using Steam-a-Seam-2, a double-sided fusible web. I’ve used Steam-a-Seam-2 on other projects but not in combination with machine appliqué. Nicole reports that she has never had a problem with frayed edges and proved it by showing pictures of one of her quilts that’s been washed multiple times. Based on Nicole’s photos, comments, and excellent instructions (see them here), I decided to give machine appliqué a try.

I chose the bowtie block, one of my all-time favorites, which I’ve always made the traditional way using Y-seams. Y-seams are a little time-consuming but the results are wonderful. (A note to those of you who avoid Y-seams like the plague: I have my own little trick in sewing them, which I will share in a future tutorial).

The bowtie blocks shown above came together much more quickly: each block is a simple four-patch with a contrasting square for the knot, fused in place and finished with a blanket stitch. The fastest bowtie block ever! 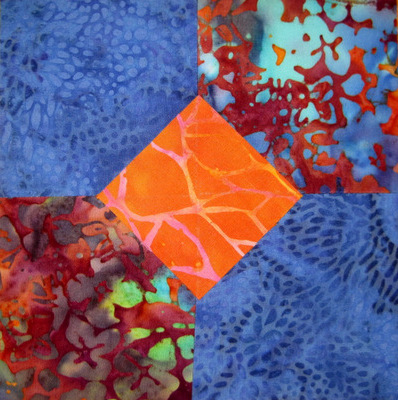 . . . and the same block with the blanket stitch added: 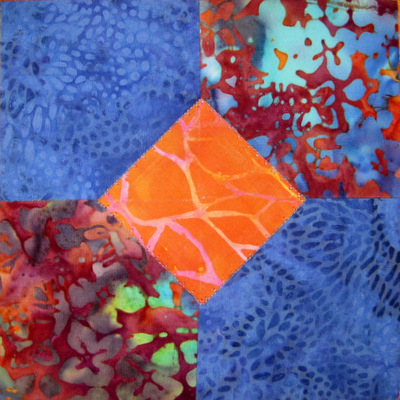 Here’s the same block from the back: 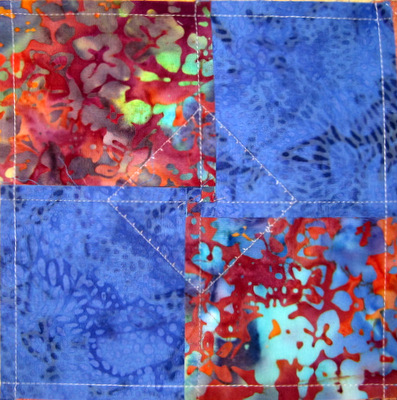 When I made the four-patch blocks, I rotated or “popped” the seam allowances open, allowing the four connecting seams to be pressed in the same clockwise direction. This gives each block a nice flat center — an important consideration when you are fusing another layer of fabric to it.

The result is Bow-tique Sunrise, a colorful, quirky little quilt. It measures 35″ x 43″, and the blocks are 6″ square. Instead of adding borders, I’m going to finish it as is, binding it in the multicolored batik featured in the bowtie blocks. Don’t you think it will make a cute baby quilt?

Every now and then I test one of my own patterns by making a new version. When I haven’t looked at pattern instructions for a few months, I find myself reading them with fresh eyes. I go over the math and measurements as well as the clarity of the written directions. My inner editor usually kicks in, and I wind up making revisions.

Recently I tested Full Moon Rising II, making a few adjustments in the process. Mogambo Moons is the result:

Although the pattern calls for different fabrics in the background blocks, I used the same Marcia Derse print for all of the blocks in this version. The moons are made of a gradated cotton sateen that travels from a pale yellow to a deep orange. The uneven striped fabric between the blocks is a batik that includes the entire range of yellows and oranges found in the moons.

I departed from the norm in one other respect. Instead of inserting set-in circles for my moons as my pattern directs, I appliqued them to the top after the blocks were joined together. They are finished-edge applique circles, backed with fusible interfacing.

This is the same method that I use for many of my quilt labels. In an upcoming post I’ll show you how I make them. The process starts with one of the most versatile objects in my sewing room: a compact disc.