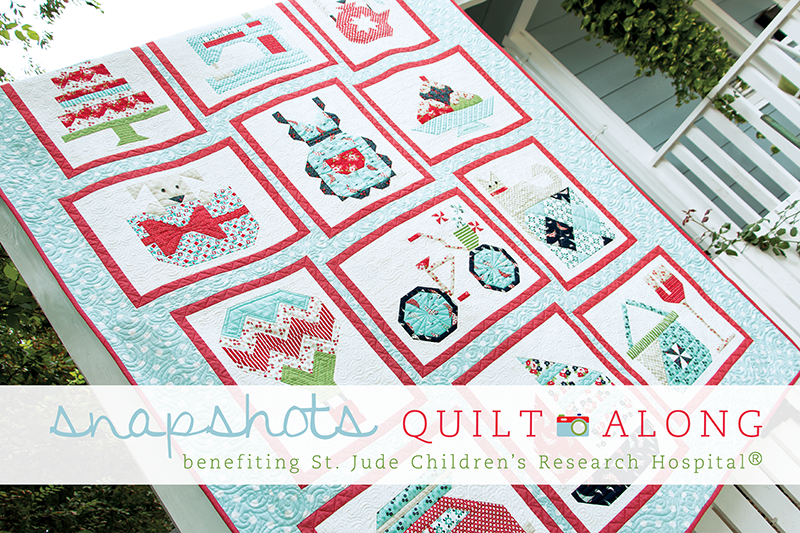 Like so many in the quilting community, I am enchanted by the Snapshots quilt you see above, designed by the mother-daughter team of Bonnie Olaveson and Camille Roskelley. Each woman is a talented quilt designer in her own right; as Bonnie and Camille, they design fabric for Moda. They collaborated to design this sampler quilt celebrating moments of happiness in our lives. The quilt is the centerpiece of a year-long Quilt-Along organized by the Fat Quarter Shop and Moda Fabrics for the benefit of St. Jude Children’s Research Hospital.

I willingly donated to this worthy cause and am downloading instructions as they are released on the 15th of each month, even though at this point I don’t plan to make the entire quilt. I do plan to make at least two blocks.

Many happy moments in my life have been spent in front of my sewing machine, so I knew as soon as I saw Snapshots that I would make February’s block, named “Sew On and Sew On” by the designers. Here is my version: 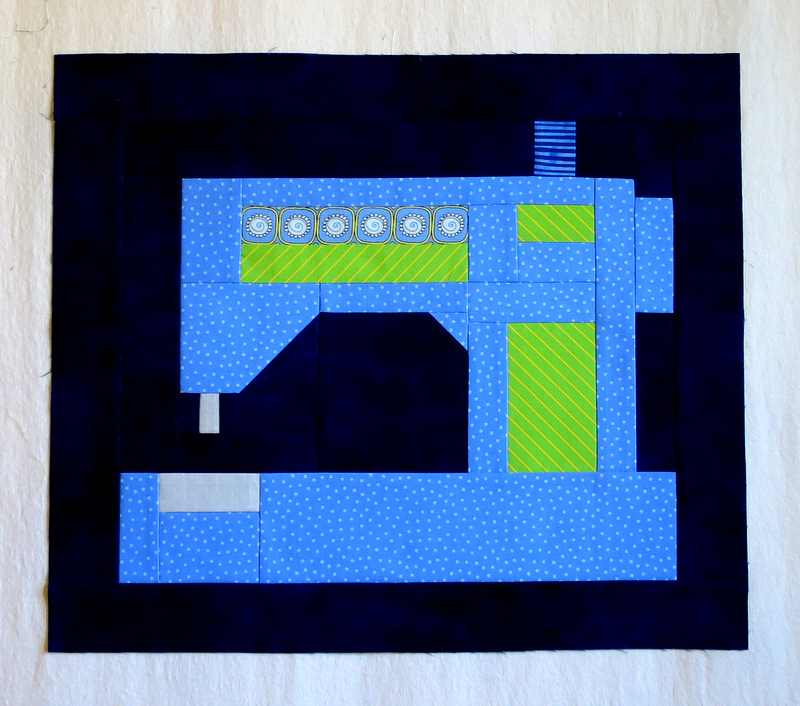 How do you like the “knobs” on my sewing machine? My color scheme was dictated by the piece of fabric in my stash that strip came from.

Bonnie and Camille’s block measures 12½” x 16½”. Since I’m not incorporating my block into a quilt, I added strips to the top and bottom and widened the side strips. My block measures 15″ x 17½”. I’m thinking about framing it and hanging it in my sewing room.

As the end of this month is mere hours away (how quickly it flew by!), I’m claiming this as my final February finish.

My third finish of the year — Marta’s Quilt:

I started this quilt last spring as part of a Quilt-Along led by Jenny Pedigo of sewkindofwonderful.com and finished the top in June. The pattern is Jenny’s own design, Urban 9-Patch. I added the fuchsia diamonds between the blocks for an extra jolt of color.

Little Miss Marta is now 14 months old. I figured I’d better hurry up and get her quilt done before she graduates from college. I had done some preliminary stitching in the ditch to stabilize the blocks in preparation for FMQ. I stitched in more ditches and then quilted ribbons in the center of each block and a loop-de-loop in the borders to finish it.

A leftover block went on the back:

Don’t you love that wrinkly, crinkly look a quilt gets when it’s been washed?

I wrote in an earlier post about my very first Quilt-Along, hosted by Jenny of sewkindofwonderful.com. A few weeks have passed since the Quilt-Along officially ended and I’ve finally finished the top of one of the projects I started:

It measures 48″ square, a good size for a baby quilt. I’m toying with the idea of using curves in the border but will wait till I’ve quilted it before making a final decision.

And here’s a little something I made recently for my friend Vivienne’s birthday:

. . . or QAL, as it’s known for short. Essentially it’s a virtual community of quilters working independently on a project over a set course of time, reporting progress and pictures via the initiator’s blog and a shared photo site such as Flickr. Quilt-Alongs have been around for years but I’m just now discovering them. (Part of my Late Bloomer syndrome.)

So how did my first Quilt-Along come about? One day in late January I was innocently cruising some quilt blogs and spotted this picture:

The block was designed and made by Jenny Pedigo of Sew Kind of Wonderful, using her own Quick Curve Ruler and a method for sewing curves without pins. Hmmm. Sewing concave and convex seams together without using a single pin? I was skeptical . . . but also intrigued. So I watched the tutorial video on Jenny’s blog, ordered the ruler, and gave it a try. I became an instant convert. And a big fan of Jenny’s, I might add.

Jenny was just getting a Quilt-Along started, the plan being to make a quilt top over 12 weeks — one block a week — using her Urban 9-Patch design and her ruler. A block a week? I can do that, I thought. So — totally on impulse — I joined the Quilt-Along. As if I didn’t have enough other projects in the works.

Here’s the first block I made, using a Riley Blake floral:

I liked the block but I had been saving some other fabrics for just the right project, and I realized this was it. So next came this block, using three fabrics from Mo Bedell’s Party Dress line for Blue Hill Fabrics:

And here are the first four blocks joined together:

(The fuchsia diamond in the center was my addition to Jenny’s design.)

I was humming along, happily making my Urban 9-Patch blocks, when Jenny introduced her Urban Deco block:

I was captivated by this new design – it’s the Urban 9-Patch block with another row around the outside. Now picture that block without the last strip of fabric that makes the block a square. Can you see the remaining curve as the outside of a quilt? I could! I decided to make a small project testing that idea, so as not to totally abandon my other QAL project.

Here is my three-block quilt, made mostly of batiks, with a pale lime Fairy Frost border and dark green batik binding:

I am so pleased with it! And Jenny has kindly given me permission to teach her design. My class, “Jenny’s Urban 9-Patch,” is scheduled for June 9 at the Pine Needle Quilt Shop in Lake Oswego.

Jenny’s Quilt-Along is over now and I’m still several  blocks behind. Time to get back to work.