The idea of successfully sewing concave and convex curves together without pins was what compelled me to try out the Quick Curve Ruler a few years ago, and I quickly became a fan. The original ruler produces curves based on a 15″ circle while the Mini makes curves based on a 9″ circle. Can you tell from the photo above which blocks were made with which ruler?

The talented women behind Sew Kind of Wonderful (founder Jenny Pedigo and her sisters Helen Robinson and Sherilyn Mortensen) launched the QCR Mini a few months ago along with new designs for the original ruler and a new book as well. Too many choices! But isn’t that what makes the quilting world go ’round?

I knew right away this block would find its way into a quilt. I’ve since made four more blocks, including the one at the top of this post, and have an idea for a unique setting.

The second QCR Mini test block, cropped in this photo to look like its 11″ finished size, is from the new Mini Rings pattern:

I will definitely make this pattern, although not in the fabrics you see above. I have plenty of strips left over from the black and white fabrics I used for the full size pattern, Metro Rings, in this quilt (Honeymoon in Paris) made in 2013:

I’ll cut the strips down for the size needed for the Mini. My Honeymoon in Paris quilt went to a good friend who actually did honeymoon in Paris (a charming story — I’ll tell you about it sometime) so I am motivated to make another one to keep.

Of the test blocks, the last one was from the new pattern Chic Country, based on the traditional Winding Ways block:

The Chic Country block finishes at 9″ square, making it the smallest of the Sew Kind of Wonderful blocks I’ve experimented with.

While I love the look of this quilt and have seen a few smashing versions on social media, I didn’t find the process of making the block enjoyable. Since quiltmaking, for me, is all about fun — and fabric, too, of course — I’ll stick to the blocks I do enjoy making.

Here’s a collage of the quilts I’ve made so far using the Quick Curve Ruler: 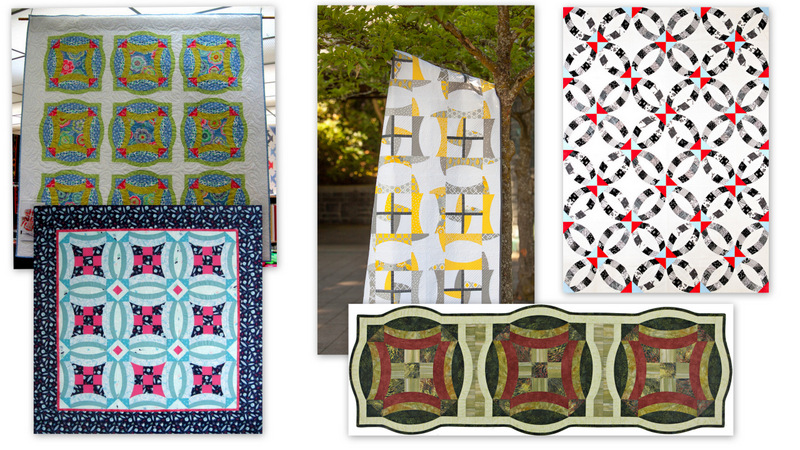 I trust there are many more in my future!