I had hoped to complete all the appliqué in the center medallion of Hazel’s Diary Quilt by now. Here’s how far I’ve gotten: 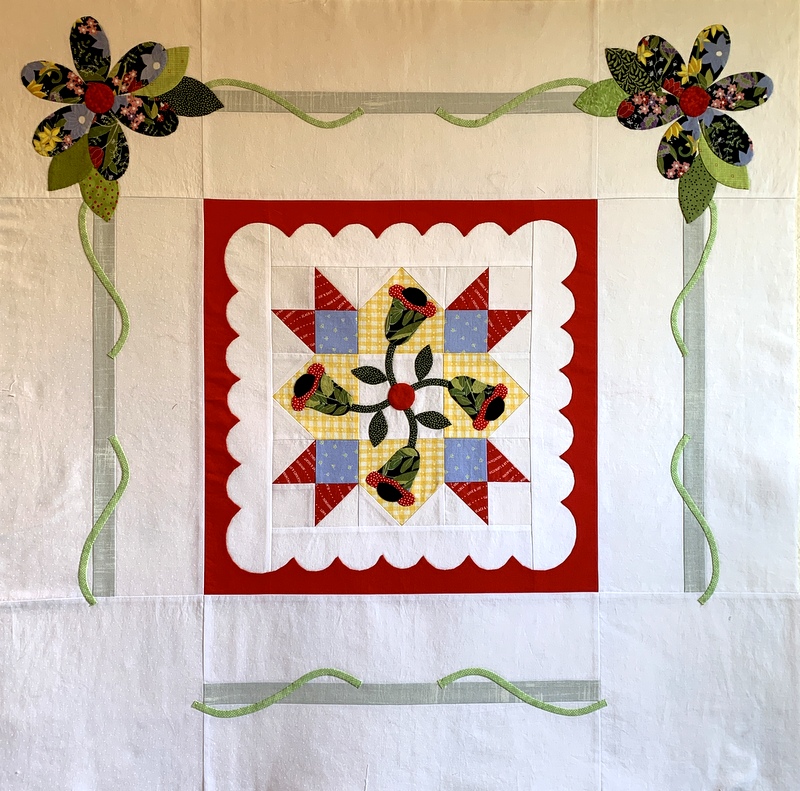 Yes, I have a ways to go but I’m pretty excited by the way the medallion is coming together. For reference, the center block including the red scallop measures 18″ square and the entire medallion measures 36½” square. It will be on point in the finished quilt. There will be flowers in each corner and leaves along the vines.

What’s happened in the two weeks since my last post? My husband Charlie and I took a road trip to Ashland, home of the Oregon Shakespeare Festival, in the southern part of the state. There we rendezvoused with Charlie’s daughter Barbie and our granddaughters Bonnie (19) and Beatrice (16) for a family vacation. They live in San Francisco and Ashland just happens to be the halfway point between our two homes. Despite being saddled with summer colds, Charlie and I had a great time with the three Bs. We saw a couple of plays, enjoyed strolling around the charming town of Ashland, and did a little shopping.

We brought Beatrice back to Portland with us as she was accepted into Oregon Ballet Theatre’s intensive summer training program for the month of July. She is in class six days a week — that’s pretty intensive! We are so delighted that she can be with us for part of the summer. We always look forward to Bonnie and Beatrice’s summer visits. Bonnie couldn’t come this year because she’s working two jobs at home. She’s so grown up now; she even has her driver’s license!

I took my appliqué project to Ashland to work on and managed to apply a few leaves and petals. Barbie was much more productive. She completed a lunchbag for Beatrice while we there — completely by hand and without a pattern. She’s very creative that way. Take a look: 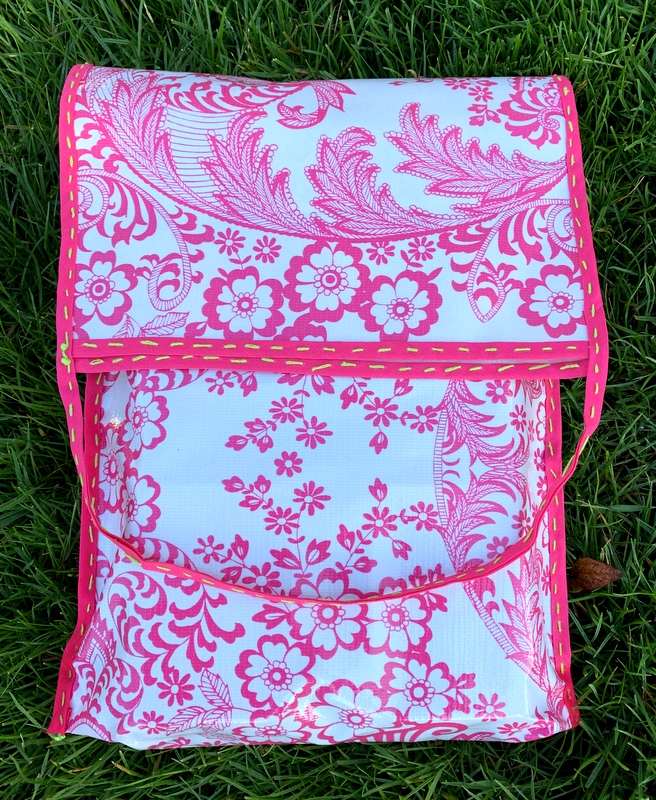 The bag is made of oilcloth. Barbie enclosed the raw edges with double-fold bias tape that she stitched on to the oilcloth with lime green embroidery floss. She sized the bag to hold three plastic containers: one for a sandwich, one for fresh vegetables, and one for fresh fruit. Then she added a pocket on the outside to hold granola bars: 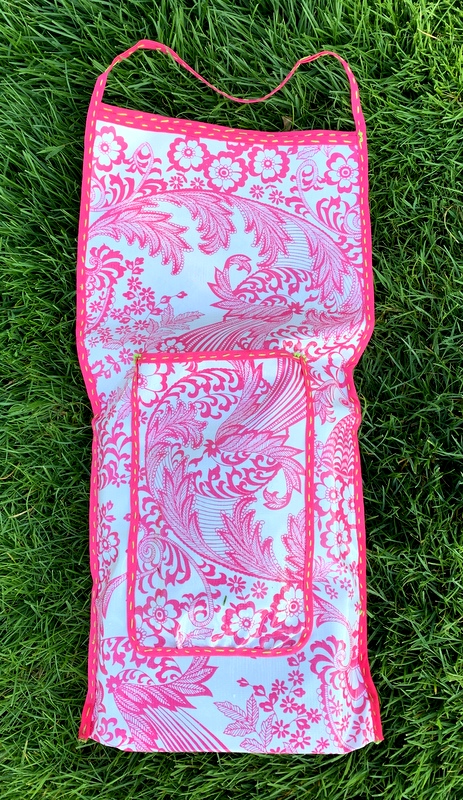 Look at the cute detail of French knots where the ends of the bias tape meet: 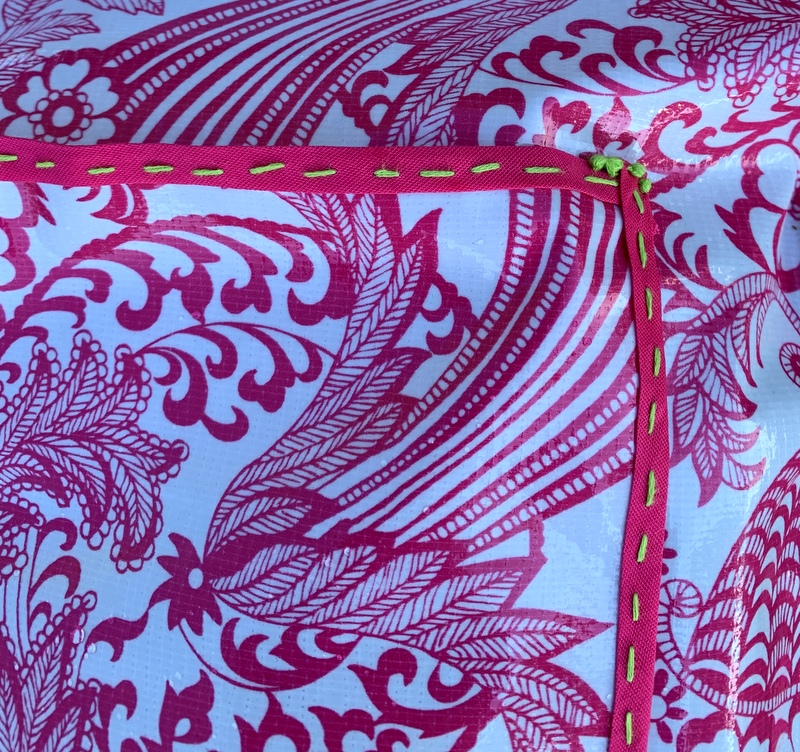 Here’s Bea on arrival at OBT for her first day of classes: 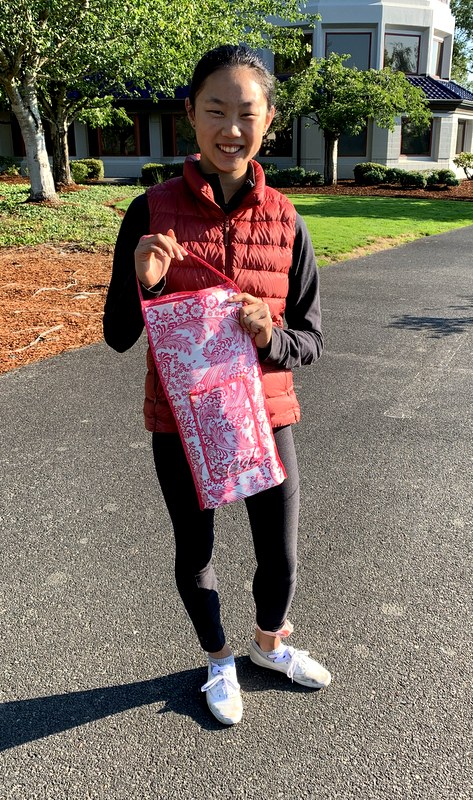 Back to Hazel’s Diary Quilt: I hope to show you my completed medallion very shortly. If I’m to finish my quilt top by the end of July (my stated goal), I need to pick up the pace.

7 Responses to Stitching and Crafting Along