I received the most wonderful gift in the mail last month, this striking quilt made in 2004  by Lee Fowler: 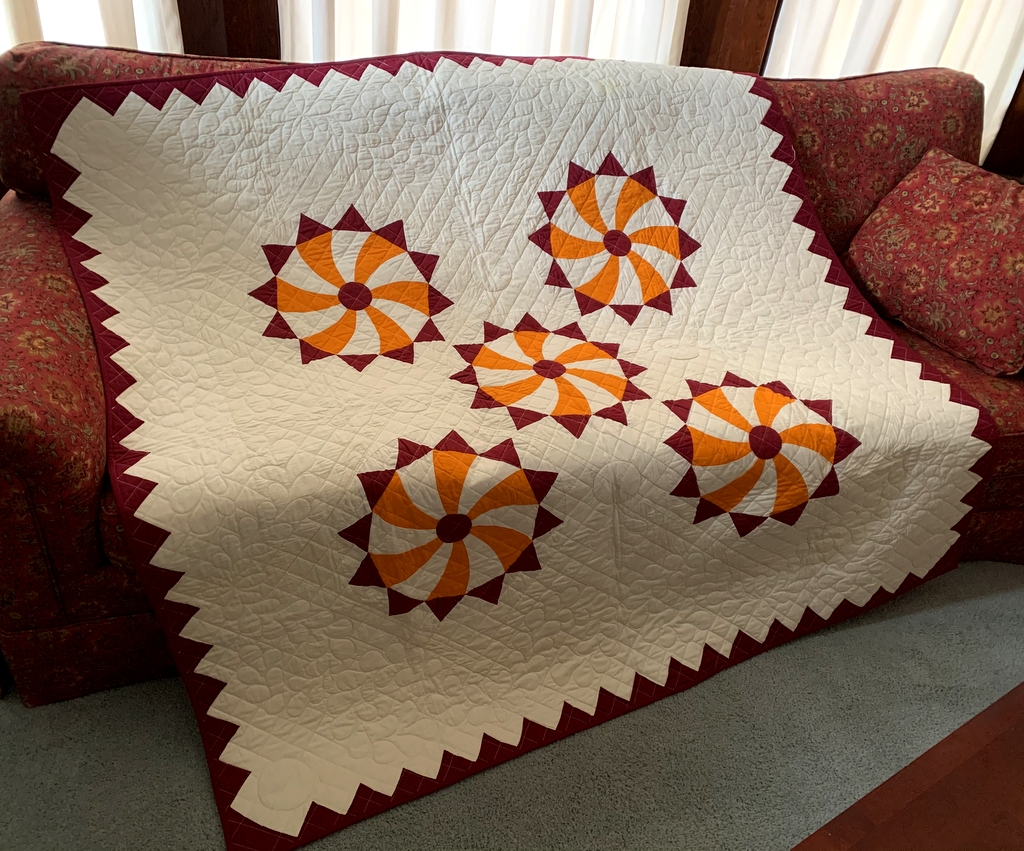 Lee was an incredibly talented quilter and crafter who was only 54 when she died of cancer in 2013. I didn’t meet her until 2009 so I had the pleasure of knowing her for only four years but she touched my life in many ways. I greatly admired her intellect and talent, and I loved her goofy sense of humor.

The quilt you see above is named Rolling Star Revisited. It was designed, pieced, appliquéd, and quilted by Lee. Here are a few detail shots, starting with a single rolling star: 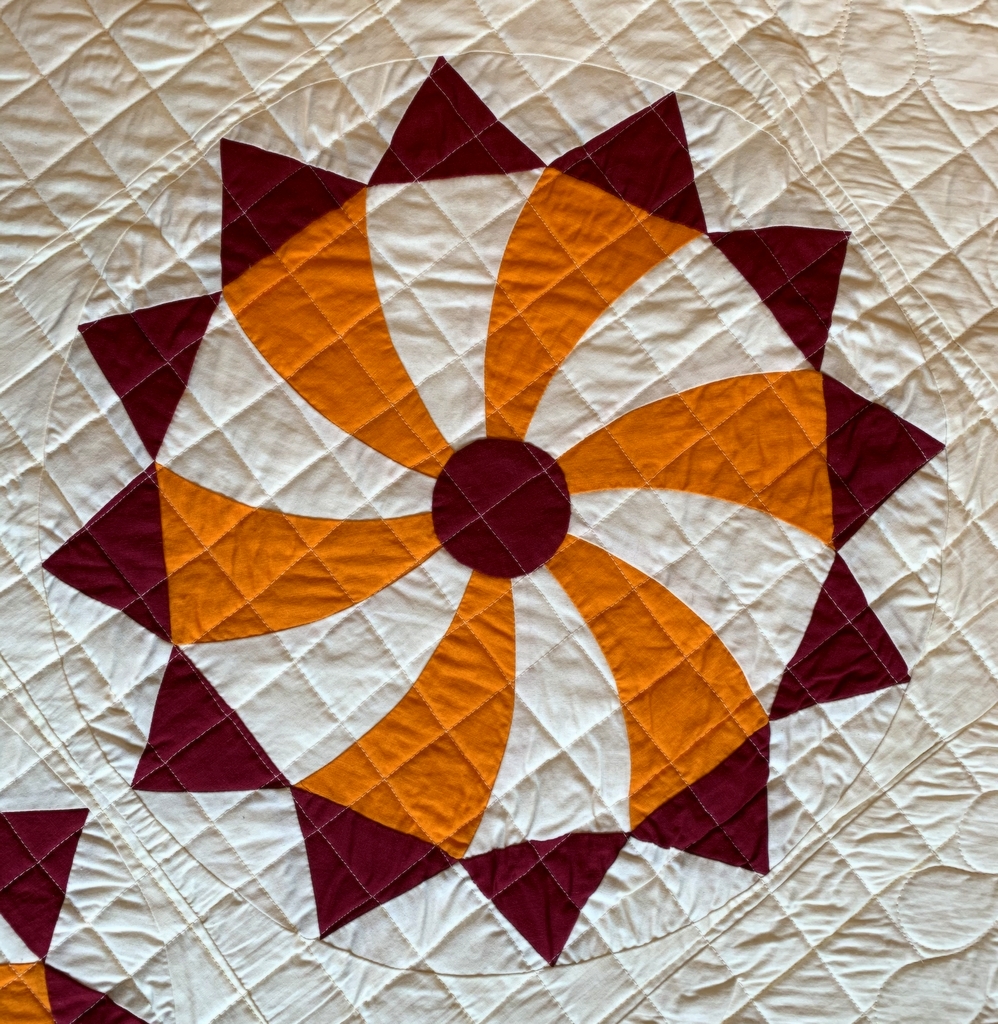 Each star measures 15″ from point to point; the entire quilt measures 58″ square.

Lee was an accomplished longarm quilter. She did hand-guided quilting without a stitch regulator. Here you can see some of her beautiful free-motion quilted feathers:

The circles in the center of each star are hand-appliquéd using the needleturn method as is the reverse-appliquéd border:

You must be wondering how I came into possession of this treasure. Well, in early December I received an email from Lee’s husband Rick, now remarried and living in another part of the state. Rick wrote that he and his daughter Liz were on a mission to send Lee’s quilts out into the world where they could be “loved, cherished, and above all used,” and asked if I would like to have one. He included photos of 16 quilts. I replied immediately, telling Rick I would be thrilled to own one of Lee’s creations and that it had taken me all of two seconds to identify the quilt I would love to have.

Rolling Star Revisited arrived a few days later. Doesn’t it look wonderful on the back of my couch? 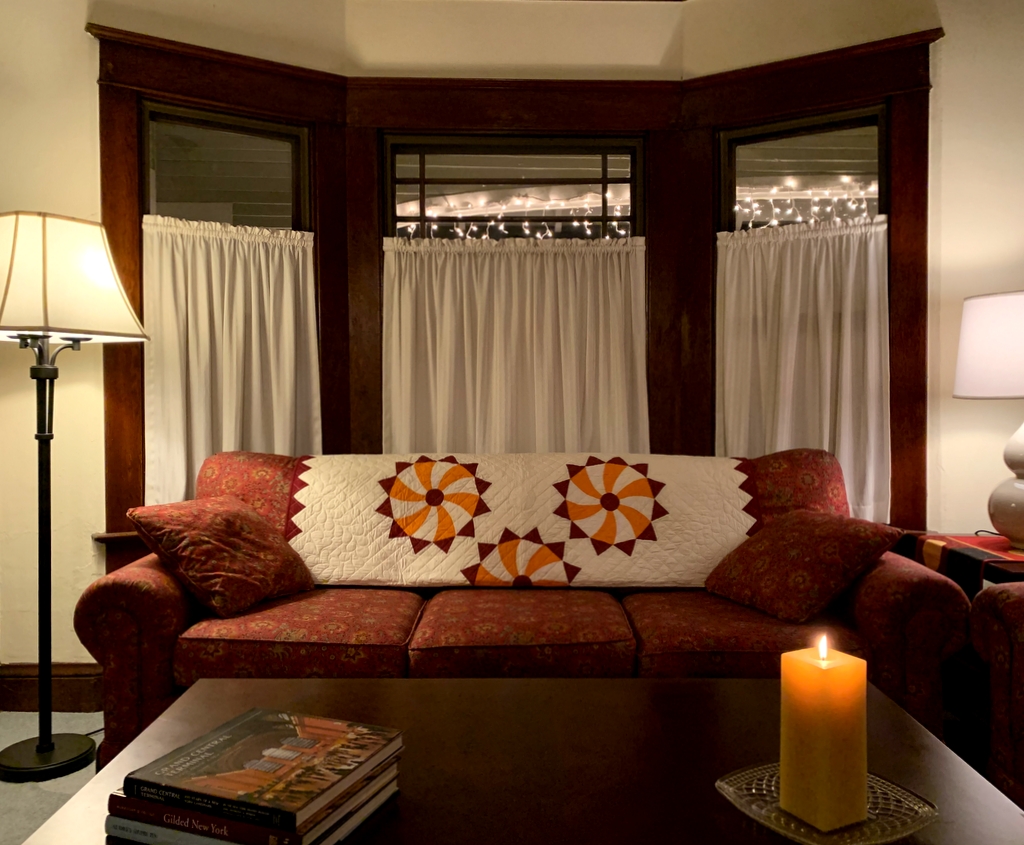 This is actually the second quilt Lee made using the Rolling Star block (hence the Revisited part of this quilt’s name). Her first version, made with Depression-era reproduction fabrics, was featured as a pattern in the September 2005 issue of Quilter’s Newsletter Magazine: 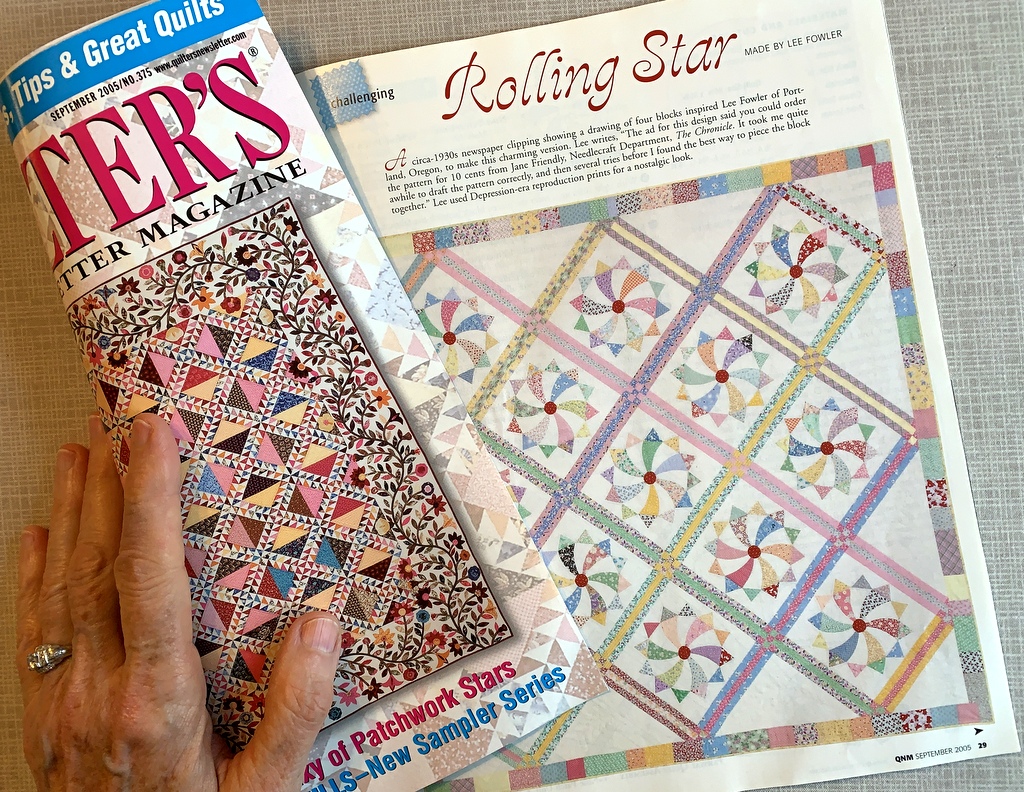 Lee had found a circa-1930s newspaper clipping of the block and drafted her own pattern. It’s a challenging project with curves and set-in seams; the directions include sewing the curved pieces by hand or by machine. One of these days I might make a single block just to test my skills.

By the way, this isn’t the first time one of Lee’s quilts has graced my couch. I was one of  two dozen friends who helped Lee complete her last quilt, a magnificent version of Pickle Dish. I wrote about that here. Rick dubbed us “the Pickle Dish Gang.” The quilt was displayed at Lee’s memorial service and afterward it was circulated to each member of the group to have in her own home for a month. It was my turn in 2015: 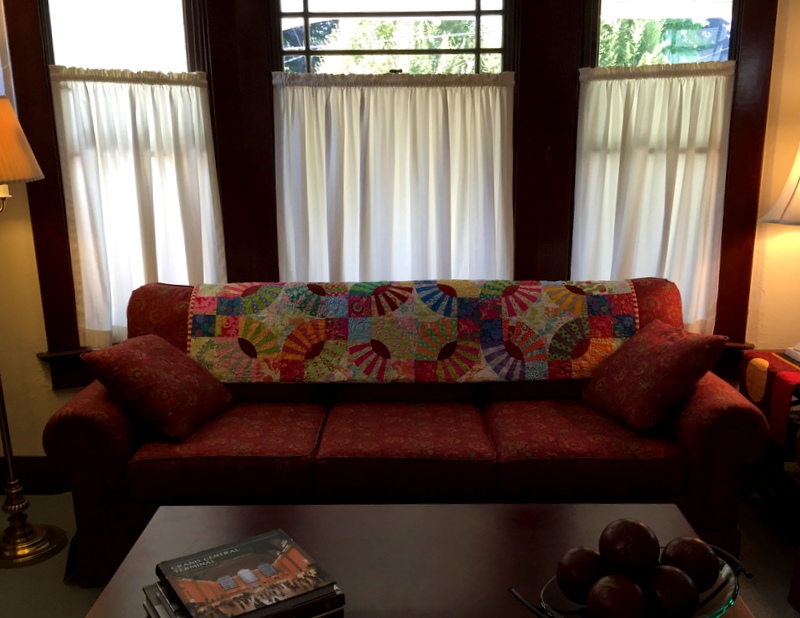 I wrote about that here. It was such an honor to have one of Lee’s creations in my home, however temporarily. And now! Now to have one of her quilts as my very own . . . You can understand why I consider Rolling Star Revisited a gift beyond compare. It will be loved, it will be cherished, and it will be used.

5 Responses to A Gift Beyond Compare