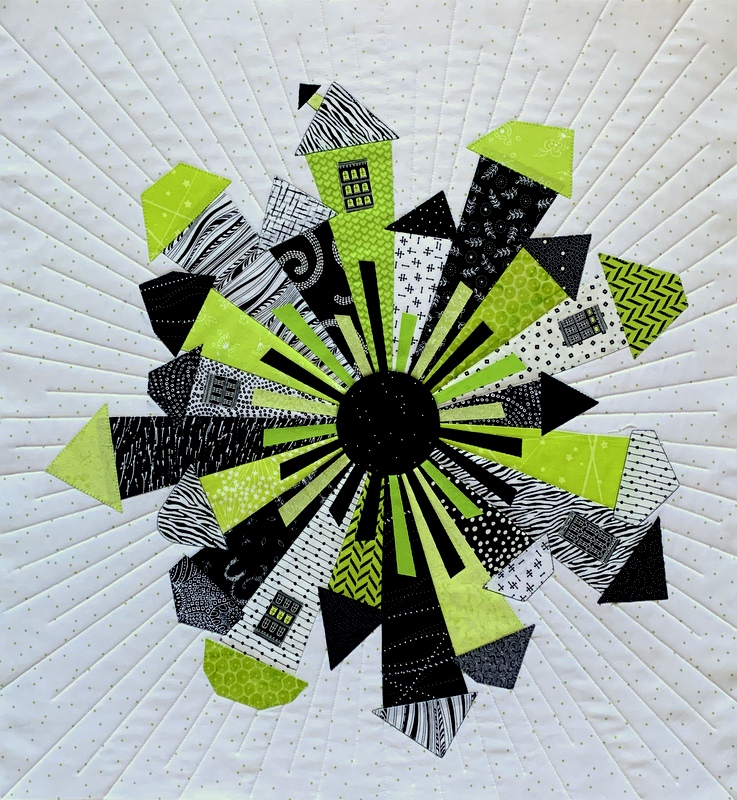 Uptown Funk, my version of Kim Lapacek’s pattern Dresden Neighborhood, needed more quilting. I knew it right away when I looked at it this morning. So what did it need? More quilting lines radiating out to the edges. Not all the way to the outside, mind you. As you can see, the new stitching lines, placed between the first set I showed you in yesterday’s post, are of staggered lengths and all end shy of the edges, some by quite a bit.

I’m very pleased with the effect but creating that effect was quite a chore, let me tell you. Each stitching line began and ended with four tiny stitches (1.0 on my computerized machine) to lock the threads in place in lieu of knotting. The main part of the line was sewn with a stitch length of 2.7. That’s a lot of stopping and starting while the stitch length was being adjusted. And I buried all the threads. Let’s see: 40 stitching lines — yes, 40! — means there were 80 sets of threads to be buried.

I’ve found that the key to burying threads easily, once you’ve drawn them to the same side of the fabric, is to trim both threads to the same length — three to four inches works best for me — and use a needle with a large eye so the thread ends go in easily: 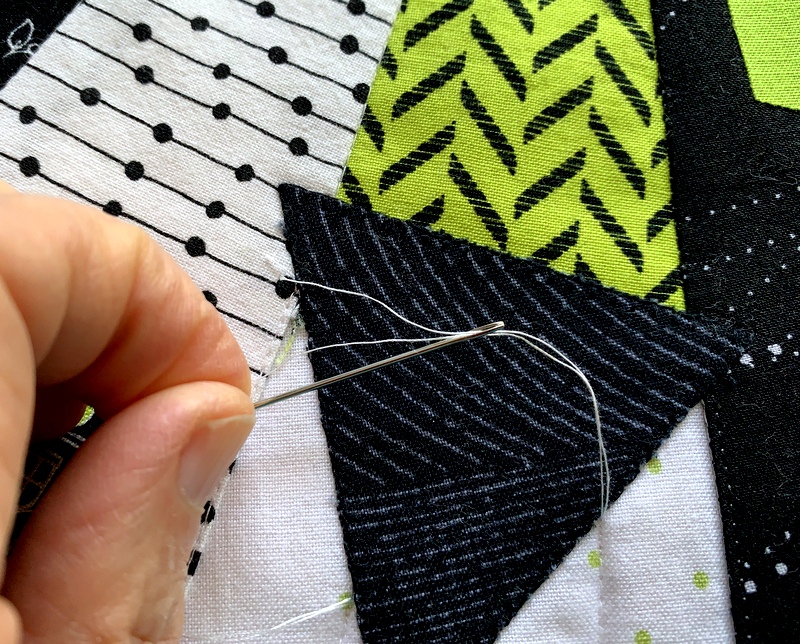 Because I pulled the bobbin threads through to the front when I started the stitching lines in the interior of the quilt, I buried a lot of the threads in the roofs: 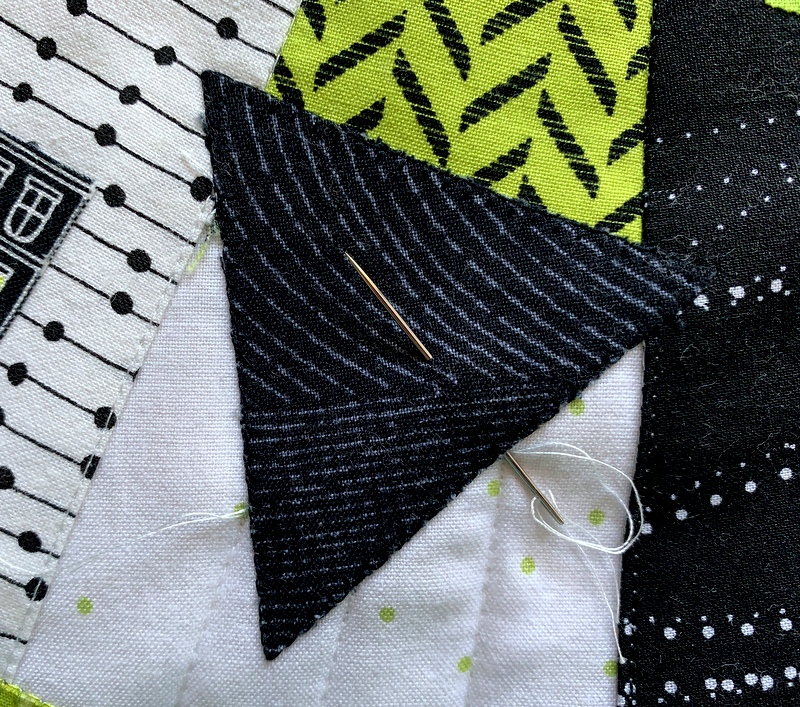 The roofs have a layer of fusible web underneath them so those threads aren’t going anywhere. It was very easy to pull the threads taut and clip them right where they came out of the fabric: 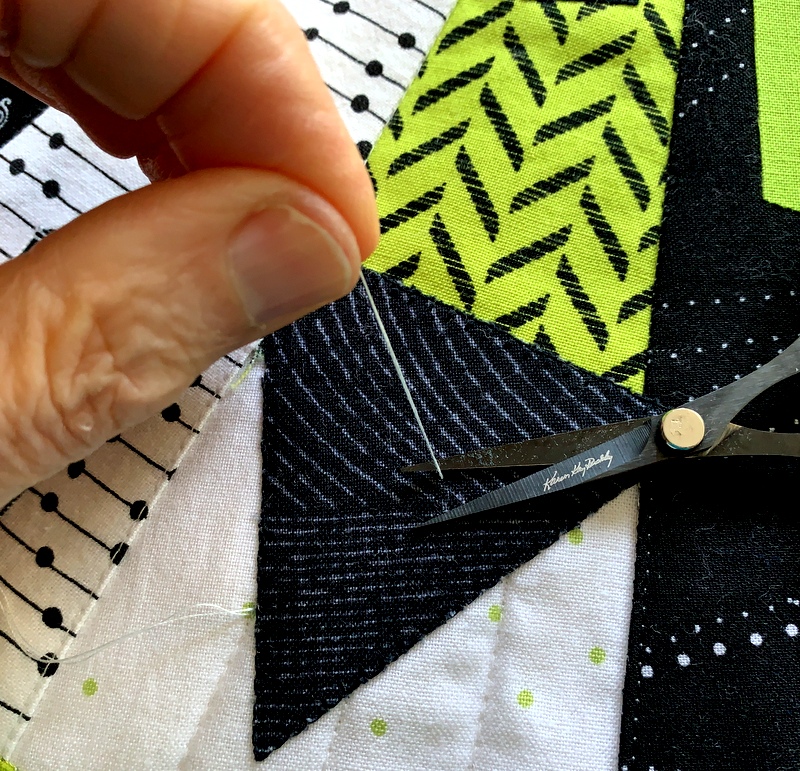 The top thread at the end of each stitching line got pulled to the back of the quilt and buried in the backing fabric.

Just before getting started this morning, I left my sewing room for a few minutes. Look who I found lounging on my ironing board when I came back: 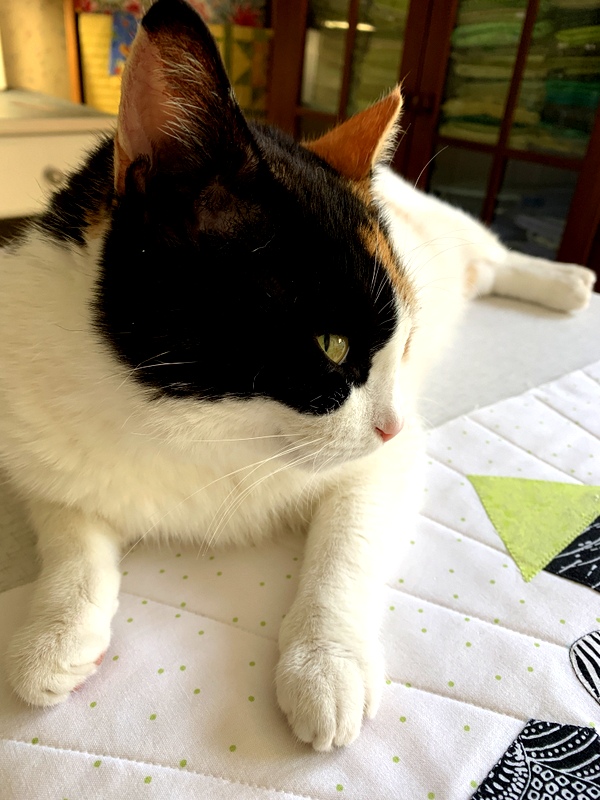 Now I’m ready for the binding. For those of you who commented on my last post and offered suggestions on color and fabric choices: thank you so much! I’m going to audition everyone’s ideas before making a final decision.

I expect to have a Friday Finish to show you.

It’s a bit of a stretch. The reference is to the walking foot on my Janome sewing machine, used to quilt Uptown Funk, my version of the Dresden Neighborhood quilt. 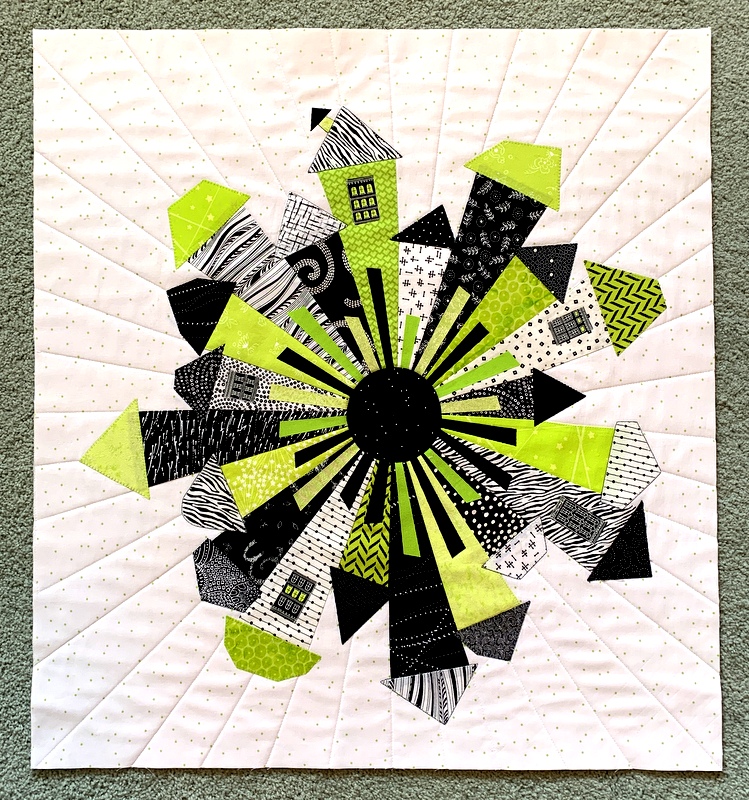 I seriously considered doing some free motion quilting in the background. Little spirals would have looked good or perhaps some pebbling. Alas, free motion quilting is not my strong suit. After considerable waffling I opted to keep it simple and go for straight lines. The doors on my wonky Dresden houses appear to radiate from the center circle so I extended the concept with my quilting lines radiating to the outer edges of the quilt.

Here’s a peek at the backing fabric:

The fabric, an older print from Timeless Treasures, features another kind of uptown neighborhood: Central Park in New York City. I’ve used this fun retro print in other projects and am happy to report I have plenty left. (There’s a funny story about this fabric you can read about here.)

My wonky Dresden neighborhood quilt measures 24″ x 26″ after trimming. Now I’m trying to decide what fabric to use for binding. Solid black seems too severe. Solid green? No, that would be too much green. I’m leaning toward using one of the black prints from the quilt and maybe inserting a very thin green flange.

. . . in honor of St Patrick’s Day. It’s rather nice to be thinking about St. Paddy’s Day and not about the self-confinement the Dear Husband I have entered as part of our responsibility to help flatten the curve of the coronavirus pandemic. I’ve read a lot of posts today about how people are coping and I deeply appreciate the perspective that Sharon Santoni of My French Country Home brings to the situation. She lives in France some 5,000 miles way from my home in Portland, Oregon but we are definitely on the same page. 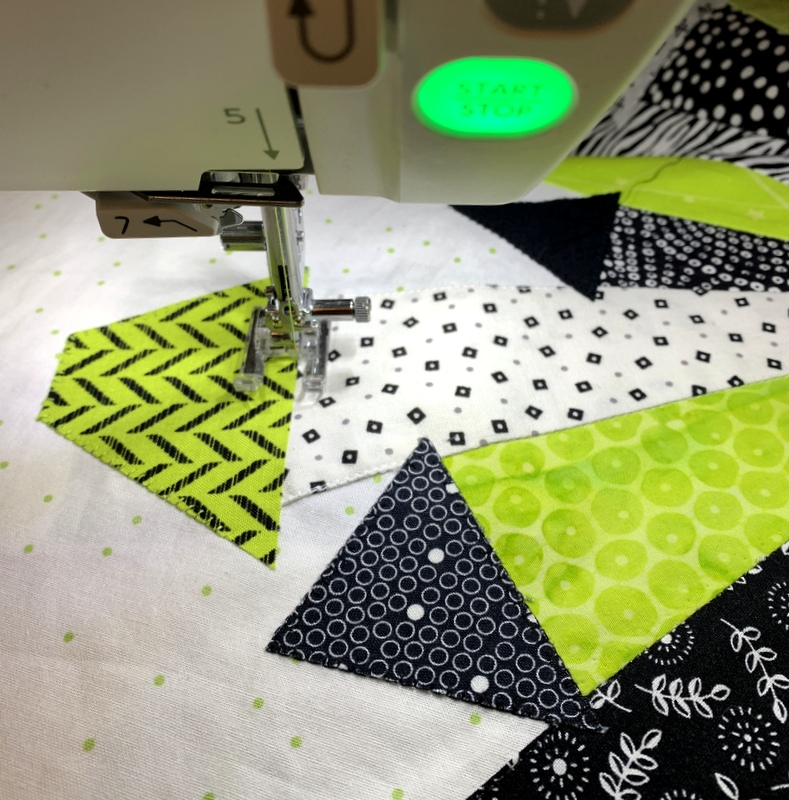 That’s the last of the 20 roofs on my Dresden Neighborhood quilt (based on the pattern of the same name by Persimon Dreams).

I stitched all the roofs using the blanket stitch on my new Janome 9450QCP sewing machine. I confess: it was harder than I expected. Not because my machine is new. No, it’s because I’ve never machine appliquéd with a blanket stitch before! How did I get to this advanced age without learning that skill?

I had to practice — a lot — on scraps before attempting it on my funky little neighborhood. The most difficult part was stitching around the sharp corners. I couldn’t find a decent tutorial on how to do that so I fiddled with the points, trying different approaches until I was satisfied. And I matched my thread with the roof to minimize the imperfections. 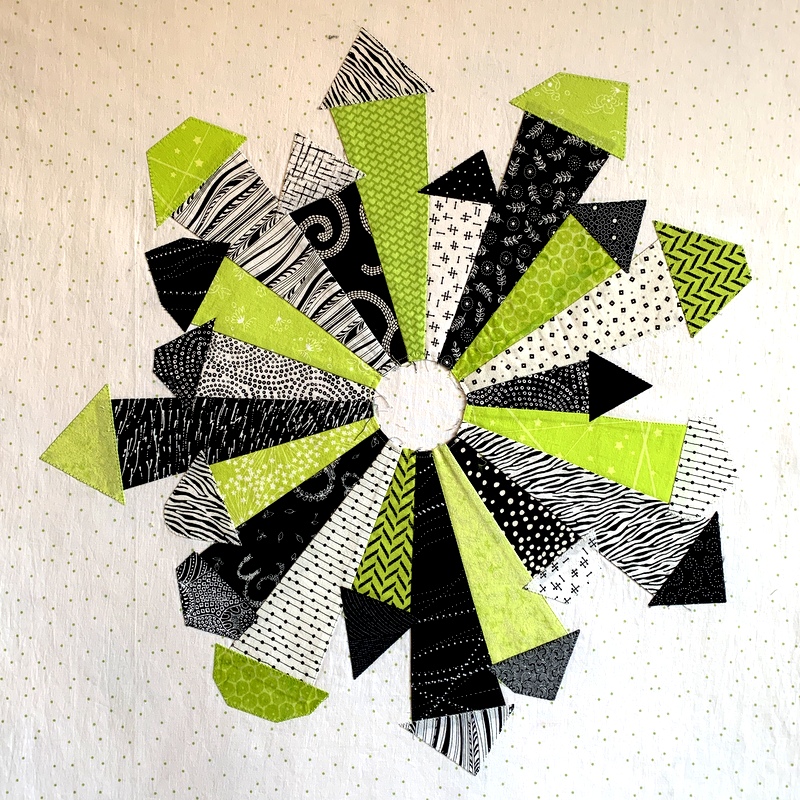 See that zebra print roof above at about the 8:00 position? It’s the only roof that’s rounded and it was very easy going around it with the blanket stitch. Had I known that when I was cutting out the roofs, I would have made more of them rounded!

Uh-oh. There’s a dark smudge just to the left of the roof in the 11:00 position, made of the same zebra fabric. Here’s a close-up: 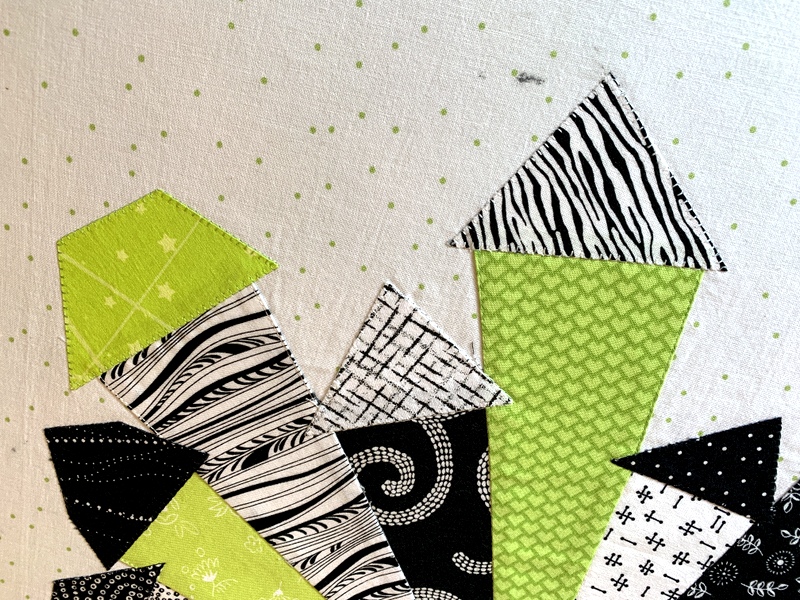 I have no idea how it got there. It definitely wasn’t there when I stitched around the roof. I tried dabbing it with a wet Q-tip but it looks like ink. The next time you see this there will probably be a chimney covering that sooty-looking spot. How appropriate.

What’s left? Doors and windows; a circle appliquéd in the center; and then it’s time to sandwich and quilt my little neighborhood.

As I was sewing the last roof on, the name for my quilt-in-progress popped into my head: Uptown Funk.