Have you ever made a block that didn’t turn out quite like you expected? Perhaps you were surprised by one of the elements but kept on making the block, not realizing you had made an error. That’s what happened to me a few days ago when I made a test block of Star Drops, designed by Margot Languedoc of the Pattern Basket. 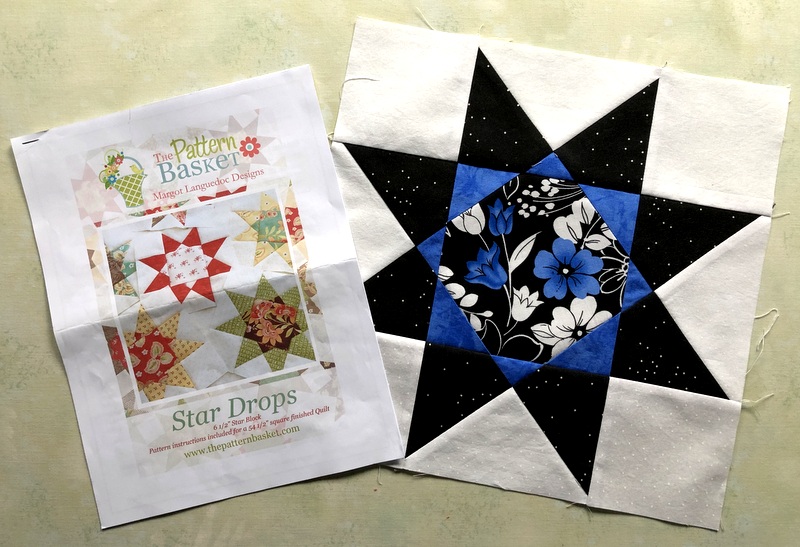 Before I bought the pattern I had studied the design, guessing (correctly) that the outer star points were made from hourglass units that were trimmed on one long side. When I made my test block I resized it from 6″ to 12″ finished, adding an additional design element at the last minute. I wrote about that in my last post.

When I trimmed the hourglass units using the calculations I had made for a block that was double in size, I was surprised that the small triangle in the center wasn’t larger. And when I converted the center square into a snowball block by adding a triangle at each corner, I was surprised that the triangles were larger than the ones in the hourglass blocks. I concluded it was because the center square is larger than the other blocks.

I had cut a quarter-inch too much off the hourglass units. That’s why the blue triangles were smaller than I expected. Oops! And then I cut the four corner squares a quarter of an inch too small. Oops again. My block was supposed to measure 12½” unfinished but it’s a half-inch shy of that.

To illustrate the difference, I drew the blocks in the software program EQ7: 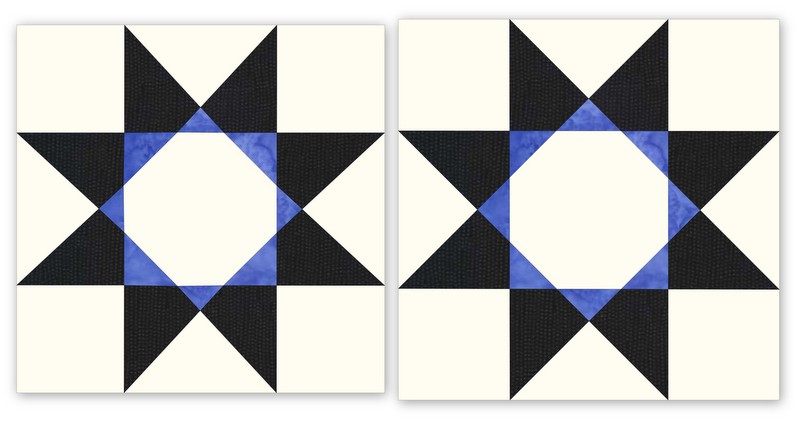 The one on the left is a mock-up of the block I made. You can see that four of the triangles are larger than the other four. This block measures 12″ unfinished, 11½” finished.

The block on the right is a mock-up of what my block would have looked like had I trimmed the hourglass blocks properly and made the corner squares the correct size. It measures 12½” unfinished, 12″ finished. (I’m sure this star block has been made many times before and has a name but I haven’t actively searched for it yet. If you happen to know, kindly leave a comment.)

What to do about my oddly sized block? Well, if it were destined for a quilt of 12″ finished blocks, I’d have a real problem. Happily, I am planning to incorporate this block into a Junior Billie Bag panel that finishes at 14″ x 17″ so I’ll simply cut the sashing strips a bit wider to compensate.

So my block is actually a mistake. But you know what? I love it anyway!

6 Responses to A Slight Miscalculation. . .