I didn’t think the block I made last month called Susan’s Star could get any better but I embellished it today by appliquéing a round fussycut flower in the center square, and I’m so happy with the result:

Credit for this idea goes to my quilting cousin, Patricia, who follows my blog and suggested the addition after reading my post of March 3. Good call, Patricia!

Susan’s Star is one of three 18″ blocks in a sampler quilt I’m working on that also features 6″ and 12″ blocks. The other two 18″ blocks have a blossom in the center, one pieced and one appliquéd:

Patricia thought my third 18” block would benefit from having a flower in the middle as well. For the block on the right I used a method other than needleturn applique. For Susan’s Star, though, I decided the time had come to give needleturn appliqué another go. If you are new to my blog, you may not know I learned needleturn appliqué in 2019 making this quilt.

Because three years had passed since I’d done any needleturn appliqué, I approached this task, simple and small though it be, with some trepidation. To be honest, I’m not sure I did everything correctly but it turned out just fine.

Stitching has commenced! Off to a good start:

After the first few stitches I felt like I had found my rhythm. Do you suppose doing needleturn appliqué is like riding a bike?

And here we are where we started, with the finished block:

I haven’t been spending nearly enough time in my sewing room lately so getting this little project completed felt very good. It was my way of celebrating National Quilting Day. 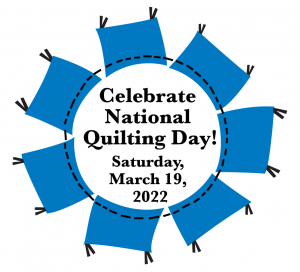